Game Over: Chevron's RICO Case Spectacularly Implodes as Corrupt Ex-Judge Admits to Making It Up in Exchange for Chevron Payoff 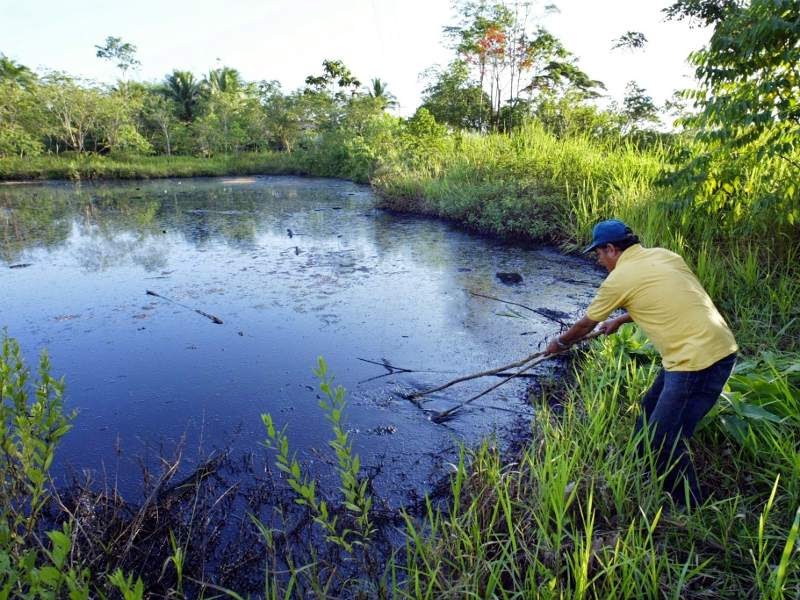 Faced with a likely multi-billion dollar verdict against it for deliberate pollution of the Ecuadorian Amazon, in 2010 Chevron began fabricating an elaborate story of bribery, corruption and ghostwriting to strike back. It claimed everyone and everything against it was part of a scheme – the evidence, the contamination, the Ecuadorian villagers, all the environmental and human rights organizations – everyone. The company spent millions to concoct its cover story. There was only one big problem: it all hinges upon the testimony of a completely non-credible witness who has now admitted on the stand that he lied about it in exchange for payments from Chevron.

Back in 2009, someone at Chevron was probably jumping up and down exclaiming "slam dunk". The company had found a key witness they could buy who was willing to say what they needed to pull together their fabricated fraud story in Ecuador. How did they "find" him? Easy, he came to Chevron asking for a bribe to help Chevron get out of its massive legal problems in Ecuador. That should have been a red flag, but fueled by their own arrogance and legal hubris Chevron moved forward with Guerra as their star witness. It turns out that rather than a Bond-esque spy thriller with intrigue and a sophisticated plot, the story for Chevron is more like "Harold and Kumar go to White Castle".

Alberto Guerra, who we explained before is a corrupt ex-judge, claimed that the legal team for the Ecuadorians offered him a bribe to ghostwrite the judgment against Chevron. Guerra said he asked Chevron for a bribe first, and they turned him down, so then he went to the Ecuadorians. Despite the fact that Guerra was acknowledged by judge Kaplan himself to be less than credible, his testimony was allowed to stand (this is the same court that forbade evidence of actual contamination). The argument was that Guerra's testimony fit the "circumstantial evidence" against the Ecuadorian legal team. Except that evidence has also evaporated.

The sweetest irony is how this has all come about. Chevron brought a separate case to the Hague under a bilateral trade agreement between the US and Ecuador. In obvious forum shopping (which has been called out by the Second Circuit Court of Appeals) they were hoping to pin their financial liability on the Ecuadorian tax payer. Only their entire effort is backfiring – like when that body recently denied Chevron's claim that an agreement with the government of Ecuador released them from civil liability. Much like the actual evidence it presented in Ecuador, Chevron is hanging itself with the very action it hoped to use to escape justice.

Guerra claimed that the bribe of $300,000 he was offered (at one point he also said it was $500,000) was to work with the presiding judge Zambrano to ghostwrite the judgment. When asked about it before the Hague Tribunal he said: "Yes sir, I lied there...I wasn't being truthful." Zambrano has denied this from the beginning and ALL the forensic evidence backs it up. You see, also as part of Chevron's Hague action, the government of Ecuador hired the world's top computer forensic analyst to review the document. As Courthouse News reported today:

"...forensic expert Christopher Racich testified that he found a running draft of the judgment against Chevron on Zambrano's hard drives. Ecuador now argues that this forensic evidence – which Courthouse News reported exclusively early this year – proves Zambrano painstakingly wrote the ruling and saved it hundreds of times throughout the case. Chevron has not been able to produce emails between Guerra, Zambrano and the purported ghostwriters, Donziger and Fajardo, Ecuador's forensic expert says."

The seemingly never ending stream of Guerra lies doesn't stop there. At first Guerra said that he had thumb drives with the judgment on it to prove his claim. Then later he admitted that he didn't. Then he said he has calendar entries of his meetings with the Ecuadorian legal team. Then he admitted that he didn't. Guerra also claimed he had agreed with Zambrano to cut him in for 20%. Now he admits that too was a lie. Chevron claims evidence of meetings with Guerra and Zambrano backs up their claims, but no, Guerra now says no meetings he ever had with Zambrano had anything to do with Chevron. Oops.

Indeed there IS evidence of a bribe – Chevron bribed Guerra to make up this story. And unlike the lie about ghostwriting, there's actual evidence to back this bribe up. Guerra, a man with less than $200 in his bank account at the time, admits that he said all these things to get more money out of Chevron. He and his entire family now live in a house Chevron bought for him, drives a car they gave him and live on $12,000 per month from the oil giant. How's that for evidence?

At this point, I'm sure you are asking yourself: How on Earth did Chevron get this witness on the stand in a NY Federal Court in the first place, and what did they think would happen once his true story came out? (The Ecuadorians tried to save Judge Kaplan from the embarrassment.) Well, they were certainly worried about how Guerra would do – which is why they coached him for 53 straight days before his testimony. It clearly wasn't enough.

Chevron's polluted house of cards has come crashing down around them. Guerra is a liar – and he freely admits it. Chevron can either double down and insist Guerra was "before it before he was against it" or denounce him now – in which case they can never argue he's credible by any stretch.

There's a LOT of provably unethical and illegal behavior here – all of it from Chevron's camp.

What should happen now:

The Federal Appeals Court should completely throw out Kaplan's verdict. It depends entirely on Guerra's false testimony and the judgement against Chevron has been conclusively proven to be legitimately written by Zambrano (as the Ecuadorian appeals court had already determined).

Chevron and their lawyers should be investigated and brought up on charges. They have intimidated judges in Ecuador, bribed others, falsified evidence, and coached Guerra to submit false testimony in US Federal Court and made a complete mockery of the our judicial system (not to mention the mis-use of a trade agreement to go after the government of Ecuador).

Amazon Watch will be calling for such an investigation. We know Chevron is never likely to admit they lied and schemed to create this false RICO attack. Nor will they stop trying to attack us and our funders. They need to be held to account.

We look forward to the day they try to peddle this preposterous RICO verdict in Canada. Perhaps we will all get a chance to see Guerra take the stand once again. If so, it can only get worse for Chevron.