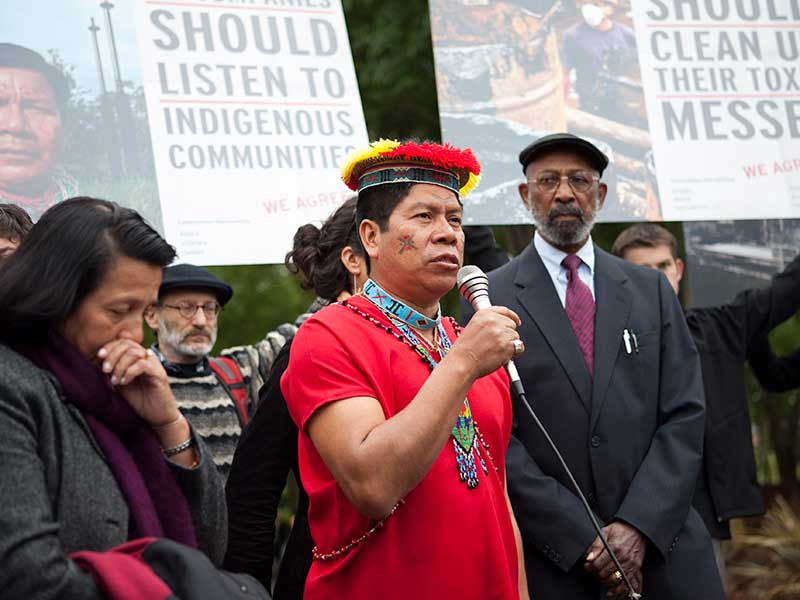 "We are looking for justice – justice for life, justice for nature and justice for future generations! Chevron says this is fraud, this is no kind of fraud."
– Humberto Piaguaje

Amazon Watch is proud to once again support Humberto Piaguaje, a longtime indigenous partner and courageous leader of the Secoya people in Ecuador, and a growing coalition of communities affected by Chevron's operations in denouncing the company's atrocious pattern of human rights abuses, environmental destruction and attacks on democracy at their annual shareholders meeting tomorrow in San Ramon, CA.


Humberto is no stranger to such a mission – you may even remember his story and the rare grace with which he tells it, a long family lineage and visits past. In 1993 Humberto's uncle Elias Piaguaje first traveled from the Ecuadorian Amazon to New York to represent the Secoya people, joining representatives of other indigenous tribes and campesino communities to file a landmark lawsuit demanding that Texaco – now Chevron – clean up contamination that devastated their rainforest homeland.


In 2011 nearly 18 years after that first visit, Humberto traveled across the U.S. with Amazon Watch, this time carrying with him a historic verdict from an Ecuadorian court finding Chevron guilty, and ordering the company to pay to clean up its toxic legacy.


Humberto, who is also the coordinator and official spokesperson of the Union of Affected Communities (Union de Afectados por la Petrolera Texaco/UDAPT), returns to California where tomorrow he will enter Chevron's annual meeting as a shareholder with a proxy. Once in, he plans to raise the issue of a new forensic report that proves Chevron's star witness lied under oath and divulge explosive internal company videos that suggest that Chevron scientists tried to defraud Ecuador's courts to evade a court-mandated clean-up of oil contamination that has afflicted Ecuador's rainforest for decades.


With evidence mounting that Chevron falsified evidence to evade paying a $9.5 billion pollution liability in Ecuador, Chevron CEO John Watson faces an embarrassing public reprimand as Humberto confronts top management with proof that the company has gone rogue in the long-running litigation.


Three layers of courts in Chevron's chosen forum of Ecuador, including the nation's Supreme Court, have affirmed that the oil giant is responsible for damage caused by roughly 1,000 toxic waste pits and 400 well sites abandoned when the company (operating as Texaco) left Ecuador in 1992 after 28 years of operations. Chevron refuses to pay to clean up the sites despite promising to comply with the Ecuador judgment as a condition of moving the matter from U.S. federal court in 2001.


"I'm here again after four years. And while this long fight goes on, the Secoya people in our territory continue dying," Humberto told us today at a press conference in San Francisco. "Our struggle for justice has gone for 21 years and 6 months now; this has been very costly for us."


"We are looking for justice – justice for life, justice for nature and justice for future generations," he went on. "Chevron says this is fraud, this is no kind of fraud."


Issues that Humberto plans to raise with Watson and the Chevron's Board of Directors at the annual meeting tomorrow include the following:


Background and more info on tomorrow's actions on ChevronToxico.


Bay Area! JOIN US tomorrow May 27th at Chevron's Annual Shareholder meeting as we take our demands to Chevron's doorstep and stand in solidarity with shareholders calling for a change in Chevron's culture of deception, corruption and destruction.