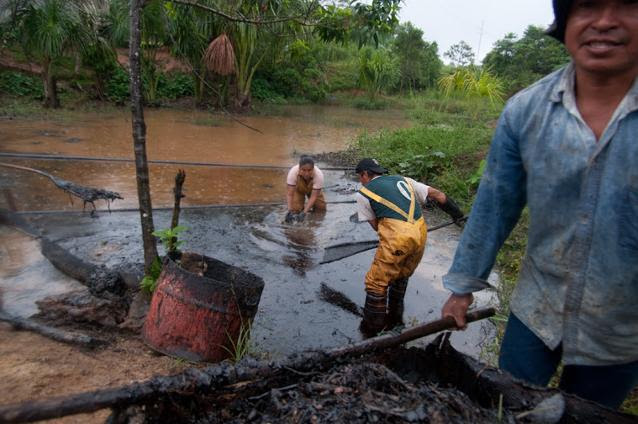 
The big news this week in the Chevron-Ecuador saga is the Patton Boggs settlement with the oil giant, which should not be shocking to anyone following the financial troubles of the law firm.

Patton Boggs' money problems began before the Ecuadorians fighting Chevron retained its lawyers to represent them in their legal battles with the oil company in the U.S.

What is shocking is that the Ecuadorians, who have suffered the contamination of their ancestral lands in the Amazon rainforest, have been completely forgotten.

Very few reporters writing about the settlement dealt with the issue of a law firm abandoning clients, who happen to be some of the poorest and most disenfranchised people on the planet, and then ALSO agreeing to turn over case documents so it could save itself from a demise brought on by factors having little, if anything, to do with the Ecuadorians.

(I should note that the Patton Boggs lawyers driving the decision to settle were not the lawyers who actually worked on behalf of the Ecuadorians.)

The legal community in Washington, DC and New York is brattling about this new development with no interest in what the Ecuadorians (and myself for that matter) have urged the American public via its news media to consider before passing judgment on this 20-year-old lawsuit: the vast, overwhelming evidence of culpability by Chevron's predecessor Texaco and Chevron's economic coercion against lawyers and consultants assisting the Ecuadorians.

I believe Chevron's intent is to malign (and financially destroy in some instances) anyone who has spoken out against its alleged environmental crimes or funded or worked on behalf of the contamination lawsuit. This is what the Ecuadorians' supporters here and around the world (myself included) have charged and experienced firsthand.

So when Chevron General Counsel Hew Pate called on all of the Ecuadorians' supporters to disavow their cause, after the Patton Boggs defection, we assumed some PR maven removed the "or else" from his statement.

Some legal columnists concluded that because a bunch of lawyers decided to put their economic interest above their clients' Chevron therefore was innocent.

Well, not so fast.

The Ecuadorians' U.S legal adviser and the focus of Chevron's attacks, Steven Donziger, will never win the Lawyer of the Year award but the evidence against him is either weak, coerced or paid for. (See here and here.)

The real news is not about Patton Boggs, but Chevron's alleged cover-up of the mess Texaco left behind.

Below are soil test results that Chevron doesn't want you or anyone interested in the long-running Ecuador contamination litigation to see.

Chevron submitted these results to the Provincial Court of Justice of Sucumbíos in Lago Agrio, Ecuador, on September 11, 2004. You can view other Chevron test results here. 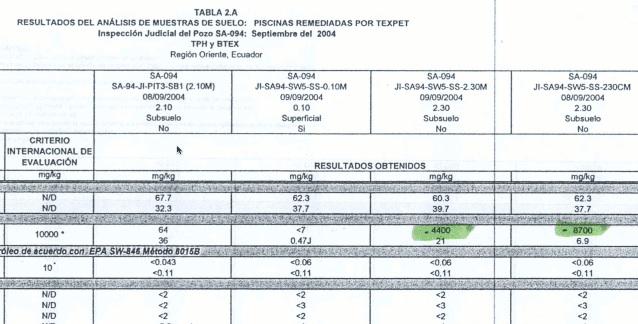 These test results suggest the company's guilt and blow up its alternative narrative that it is the victim rather than the indigenous peoples and villagers living in the rainforest Texaco polluted. The Ecuadorians have made this charge in numerous court briefs.

Chevron's own independent experts took the tests during an eight-year trial in Ecuador. These experts, paid by Chevron, found high levels of harmful toxins; some are known human carcinogens. Tens of thousands of test results similar to the ones I describe here are found in the Ecuador court record. They are Chevron's documents. Not the Ecuadorians.

Based largely on Chevron's own evidence, an Ecuador court awarded the Ecuadorian villagers $9.5 billion in damages in 2011, resulting from what it said was the company's deliberate contamination of the rainforest during oil exploration from 1964 to 1992.

An appellate court and the country's Supreme Court upheld the judgment.

The Ecuadorians attempted to submit these test results and others into the record of a U.S. court, where Chevron argued the judgment was a fraud, but Federal Judge Lewis Kaplan refused their request, saying the trial wasn't about the contamination at all.

Exactly how Kaplan can rule the judgment was obtained fraudulently and not allow contamination results, I don't know how to explain.

What I do know is that Chevron's management team has refused to pay the judgment, even though the company fought relentlessly to conduct the trial in Ecuador after the villagers originally filed it in New York federal court in 1993 – yet another example of the company's subterfuge.

Because Chevron stripped most of its remaining assets from Ecuador in anticipation of losing the case, the affected villagers have filed enforcement actions in Brazil, Canada and Argentina. Chevron does have assets in those countries – substantial assets that collectively approach $20 billion in value. The villagers plan to seize enough of them to force Chevron to comply with the Ecuador judgment so they can conduct a long-awaited cleanup of their sacred ancestral lands.

Chevron says these courts do not have jurisdictional authority (the Ecuadorians argue otherwise) but no court that respects the rule of law will let the oil giant off the hook, when it sees these contamination tests.

The vast majority of test results from the Ecuador trial support what the villagers in the former Chevron concession area always have alleged: Chevron contaminated their land, using substandard drilling practices to minimize costs and maximize profit. See this video.


Along with Chevron's independent experts, the technical experts for the affected communities and numerous court-appointed experts found high levels of total petroleum hydrocarbons. TPH is a measurement of toxic and, in some cases, carcinogenic chemicals and metals in soil.


Ecuador law allows 1,000 parts per million of TPH in residential areas, while, guess what? – Chevron argues that 10,000 TPH should be the limit. That's 100 times more than in the United States where many states allow only 100 TPH.

Why is 10,000 TPH protective enough for Ecuadorians – in Chevron's estimation at least – but not for Americans?

Chevron's tests also reveal that the oil giant has obfuscated to both U.S. and Ecuador courts about its main line of defense: the 1995 remediation agreement with the Government of Ecuador. The Ecuadorians argue the agreement did not release Chevron from liability, but even if it had, Chevron's own test results show that the remediation itself was inadequate at best and, most likely, fraudulent.

For example, Chevron's tests from well sites Sacha 94 and Sacha 57 show illegal contamination, even though Texaco said it cleaned them. Chevron can't blame anyone but Texaco for this environmental damage: Texaco alone built and closed these sites.

At these sites Chevron found up to 8700 TPH levels – almost 9 times greater than permitted under Ecuadorian law and evidence that Texaco did not clean the well sites adequately, if at all. There are many just like these with even greater TPH levels.

Texaco, it seems, simply poured dirt over oil pits to mask their danger. And, if lying about the cleanup wasn't bad enough, many villagers built their homes near or on the sites because they believed they had been cleaned.

Chevron's experts also found illegal amounts of benzene, barium, cadmium, lead and other chemicals in the environment – all toxic and dangerous to human health. For example:

Benzene: 18 mg found at the Sacha Norte 2 well site; Ecuador law allows only 0.05 mg. Benzene is a colorless liquid made mostly from petroleum; it is also a known human carcinogen.

The CDC says this about benzene:


"Long-term exposure to benzene can cause cancer of the blood-forming organs. This condition is called leukemia ... The Department of Health and Human Services (HHS) has determined that benzene is a known carcinogen (can cause cancer)."

Barium: 10,100 mg per kg, found at SSF-25; Ecuador law allows only 750 mg per kg. Barium is a metal used as drilling mud during oil exploration.


The CDC on barium:

"Eating or drinking very large amounts of barium compounds that dissolve in water or in the stomach can cause changes in heart rhythm or paralysis .... Some people who did not seek medical treatment soon after ... have died. (Some who ingest smaller amounts) ... may experience vomiting, abdominal cramps, diarrhea, difficulties in breathing, increased or decreased blood pressure, numbness around the face, and muscle weakness."

Cadmium: 4.1 mg per kg found at Sacha 18 well site; Ecuador law allows only 1 mg. Cadmium is a mineral that enters soil, water and air as a result of oil exploration.

The CDC on cadmium:

"Breathing high levels of cadmium can severely damage the lungs. Eating food or drinking water with very high levels severely irritates the stomach, leading to vomiting and diarrhea. Long-term exposure to lower levels of cadmium in air, food, or water leads to a buildup of cadmium in the kidneys and possible kidney disease. Other long-term effects are lung damage and fragile bones. HHS and the International Agency on Research of Cancer have determined that cadmium and cadmium compounds are human carcinogens."

Lead: 294 mg per kg, found at SSF 25; Ecuador law allows only 80 mg per kg. Lead is a metal that enters soil, water and air through oil exploration.

The CDC on lead:

"The main target for lead toxicity is the nervous system, both in adults and children.... Lead exposure may also cause weakness in fingers, wrists, or ankles. (It) also causes small increases in blood pressure, particularly in middle-aged and older people. Lead exposure may also cause anemia. At high levels of exposure, lead can severely damage the brain and kidneys ... and cause death.... The HHS has determined that lead and lead compounds are reasonably anticipated to be human carcinogens based on limited evidence from studies in humans and sufficient evidence from animal studies, and the EPA has determined that lead is a probable human carcinogen."

Reporters who have been covering the long-running litigation know these tests exist. But they don't write about them. Many say they are simply too difficult for their readers to understand. Others say they are boring.

That is exactly what Chevron is counting on: that the news media, the courts and members of the public interested in the case will never learn of the overwhelming scientific evidence against the company but instead will focus on the sensational and largely baseless allegations of fraud and bribes, backed by tainted and corrupt testimony paid by Chevron or extorted via economic pressure.


It looks like crying "fraud" in the face of the overwhelming evidence against it was Chevron's Plan B from the beginning.