The Bush Doctrine Comes to Oakland Courtesy of Chevron 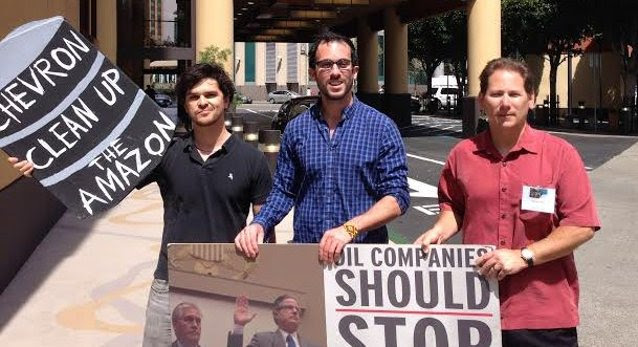 Chevron continued its unprecedented campaign of attacking its critics last week when I was forcibly removed from a half-day conference I paid $75 to attend simply because I was affiliated with Amazon Watch. The strangest part was the excuse given for the outrageous step was that it was a preemptive act for something they feared I might do.


In a flagrant violation of my right of association, last Wednesday, the Oakland Metropolitan Chamber of Commerce (OMCC) held an "Economic Development Summit for Energy and Sustainability" sponsored by Chevron. As an Oakland-based environmental organization it would seem to follow that Amazon Watch would be a welcome participant at just such an event. However, the moment my affiliation was made known I was told "Amazon Watch is not welcome here." And security was called to remove me. Why exactly? 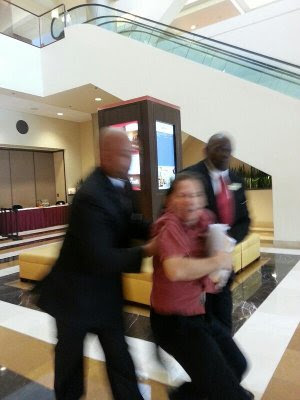 Of course, Amazon Watch has repeatedly spoken out against Chevron attempts to greenwash itself of its Ecuador disaster. And so apparently, when Amazon Watch tweeted that we planned to attend a "sustainability summit" to ask why Chevron was the primary sponsor (given their record) that was deemed justification to have me forcibly removed. While at the conference I spoke to only one person in attendance and when asked if I was planning to "hand out information" I answered politely: "No. I am simply here to attend the conference and listen to the presentations." So despite my assurances that I was doing nothing more than attending, somehow the conference organizers deduced that I was going to be "disruptive" and took "preemptive action".


I wonder if the OMCC thinks the national news coverage and angry calls, emails and tweets  they've received since their outrageous acts were more "disturbing" than allowing me to stand and listen at their conference.


Once ejected, I immediately called the office of Oakland's mayor Jean Quan. The mayor had been a speaker at the conference less than an hour before the incident. Her office did reach out to the OMCC on my behalf, but they were "too busy" to answer the repeated calls. Perhaps they were on the other line with Chevron at the time. Later that day the OMCC issued what the mayor's office referred to as an apology(?). It states:


"We're sorry to have asked a paying attendee to leave, and have reimbursed the cost of his ticket. Previous actions by Amazon Watch in other venues and their social-media messaging in advance of our conference raised our concern that this attendee (an employee of Amazon Watch) intended to be disruptive. We regret any misunderstanding on our part."


Of course, that was a lie. Chevron and the OMCC were determined to make sure Amazon Watch was not permitted to attend. The excuse that they feared we were going to be disruptive is unacceptable. Nor was this an isolated incident, but rather part of a growing threat to environmental advocacy for corporate accountability.


Chevron is so scared of the truth that even having someone in the room who might talk about their acts is a threat. Is it any wonder they've spent hundreds of millions of dollars on greenwashing ads, fake news websites, bribes and retaliatory legal attacks?