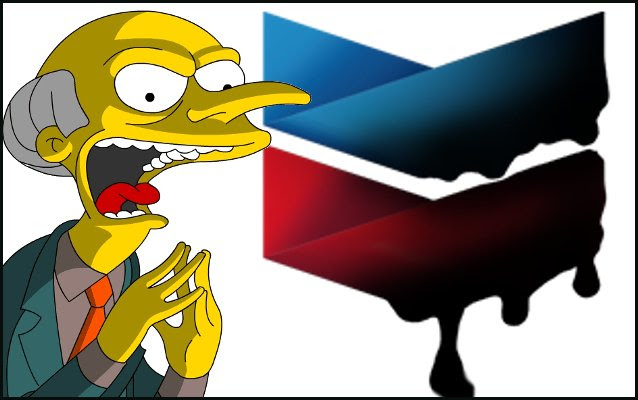 
Would people really offer a coupon for a free pizza and soda to families who just had a gas well blow up in their community, killing a worker and burning for days? People did.


In a move that would make Montgomery Burns proud, Chevron "apologized" to the community for the massive explosion of their fracking well in rural Pennsylvania by offering each affected family a coupon for free pizza from a local pizza joint.


This is one of those rare glimpses into a corporation's ethos, or lack thereof. Somewhere inside Chevron the decision was made that a $12 large pizza and a two-liter soda was proper compensation, or at least sufficient to pacify people for the "inconvenience" of having a huge explosion and toxic fire in their neighborhood. We called Bobtown Pizza this morning (with a story like this, you really gotta hear it for yourself to believe it) and at this point they are just wishing this whole thing would "blow over" (no pun intended).


Chevron's attitude in the US in 2014 has barely evolved from their attitude in 1964 in Ecuador's Amazon rainforest. Back then Chevron told villagers that oil was good for them, to rub it on their joints for arthritis! They sprayed it on the roads to keep down the dust and people walked on it for years, shoeless. All the while they were dumping billions of gallons of toxic waste into pits that drained directly into waterways used for drinking and bathing. Could they get away with that in Pennsylvania today? If it turns out that communities can no longer drink their tap water due to Chevron's fracking, will the company send them coupons for a case of Diet Mountain Dew?


We're not easily surprised by Chevron spokespeople saying horrific and ludicrous things anymore, but this was so tone-deaf that even we were impressed. We haven't been so in awe of Chevron's insensitive hubris since Sylvia Garrigo dismissed Ecuadorians' cancer and other severe oil-related health issues on 60 Minutes by saying, "I have makeup on, and there's naturally occurring oil on my face. Doesn't mean that I'm going to get sick from it." Check out this video, Great Moments In Stupid Chevron PR, for similar outrageous statements.


The friendly, unsuspecting people at Bobtown Pizza are bearing the brunt of complaints and crank calls due to community outrage. We'd suggest that unhappy citizens instead contact Chevron toll-free. Bobtown Pizza never expected a national backlash and coverage from CNN, Newsweek, and others, but they also weren't aware that Chevron is the largest corporate criminal on the run and on the hook for $9.5 billion in Ecuador. They didn't know that Chevron's Richmond refinery blew up not long ago and that they violated 62 EPA regulations there. They didn't know that over 40 environmental and human rights NGOs recently condemned Chevron's actions and over 100,000 people have sent messages to the US Senate to complain about their abusive legal tactics.


And Chevron, just in case you were wondering, the 30,000 Ecuadorians who sued you for polluting their homes and fouling their future will not be appeased by an order of empanadas and a six-pack of Inca Kola.