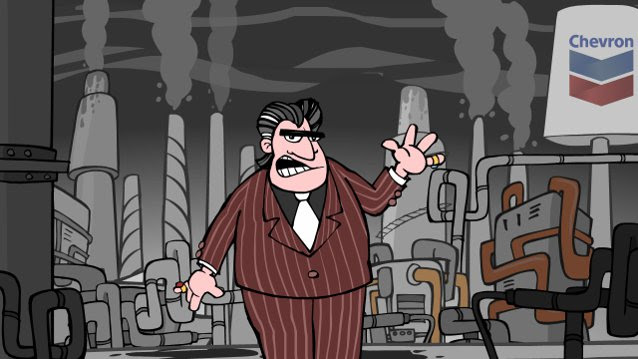 Cartoons are dangerous. Did you know that? In fact, Chevron wants a US Federal Court to believe cartoons are even more dangerous than dumping billions of gallons of toxic waste into the Ecuadorian Amazon and then suing the very people it poisoned. Suppressing free speech, crushing critics with legal attacks, and violating the 1st Amendment – also less scary than cartoons, according to Chevron.


Pulitzer Prize winning animator Mark Fiore discovered this when we pointed out that Chevron's latest legal filing in their bogus RICO action against the Ecuadorians and their supporters included these lines:


Chevron Has Suffered, and Will Continue to Suffer, Ongoing Injuries

...Chevron continues to be threatened with a variety of "real, immediate, and direct" injuries.

...they have already unleashed a barrage of near-daily press releases, letters to government officials and shareholders, web videos, and cartoons in an effort to extort a payoff from Chevron.


Fiore explains it on his blog in Part 1 and Part 2. He (@MarkFiore and @The_Donny_Rico) then created a Twitter-storm and it's been picked up by Salon.com among others. It was only a matter of time before he too joined the ranks of the "global conspirators" in Chevron’s eyes. Yep, Donny Rico nailed it!


You see, the juiciest irony here is that the "cartoon" is a satirical parody of a mobster – Donny Rico – explaining how "he and Chevron" can show other corporations how to silence the critics of their environmental and human rights crimes.


What continues to amaze is how Chevron thinks this makes it come across as a victim. In actuality, Chevron is afraid of the truth. The fact that a funny satirical video is raising awareness around the truth about what it did in Ecuador and the company’s unconscionable pressure tactics to lash out at anyone critical of them is what really terrifies them. The fact that over 40 NGOs have condemned their actions and over 100,000 people have emailed the US Senate to intervene – yeah, that’s scary. And it ought to be.


Most chilling of all, however, is that throughout all this the people of Ecuador live every single day in the midst of Chevron's pollution. They continue to get sick and die from it while Chevron reaps billions in profit each year – throwing much of it away on real life "Donny Ricos." Until Chevron cleans up its mess, they can expect the "barrage" to continue… and no one is buying their sob story.