The Truth Has No Place in Kaplan's Court 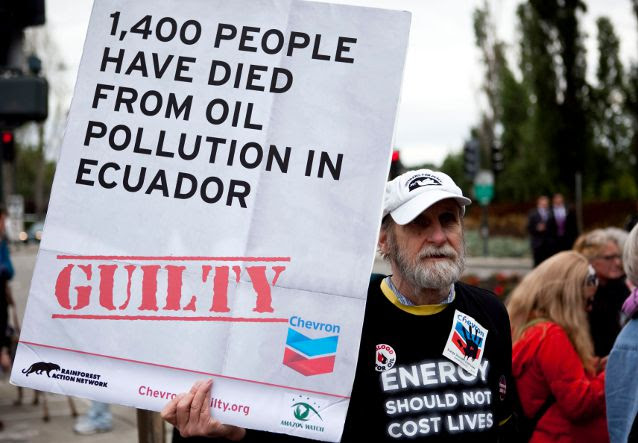 
You likely already know that Chevron (as Texaco) admitted to deliberately dumping close to 18 billion gallons of toxic foundation waters into the pristine Ecuadorian Amazon over several decades (1964-1992). The company split from Ecuador in 1992, conducted a "remediation" proven to have been a complete sham, and got a $40 million "get out of jail free" card from the government of Ecuador (which specifically did NOT exempt them from any third party action). The results of their malicious acts to save just a few dollars per barrel? A wave of cancers and birth defects (incidentally, a Texaco engineer estimated in the 60's that about $4 million would cover the costs of building industry-standard lined waste pits but Texaco thought that was too costly) and a horrific health crisis that continues to this day.

In what is one of the most unlikely and significant victories in environmental and human rights history, 30,000 indigenous people and campesinos won a $9.5 billion judgment in a class action suit after 20 years of ugly legal battles (now upheld by Ecuador's highest court). Unlikely because of the unprecedented and overwhelming pressure placed on the plaintiffs, their supporters, Ecuador and the Ecuadorian judicial system. And significant as it sets an encouraging precedent that those victimized by powerful corporate forces have hope for justice and a way to fight back.

So how on Earth could this victory be so ridiculously, unethically and illegally turned on its head and evolve into the shocking display that just played out in a US Federal Court? And what repercussions and worrisome precedents could such reckless actions hold for corporate accountability and legal processes around the world?


I just spent most of the last two weeks in that New York City courtroom, where U.S. lawyer Steven Donziger and the Ecuadorian Lago Agrio plaintiffs found themselves accused of extortion and racketeering by the 3rd largest corporation in America. Chevron's sham trial will wrap up today, but thanks to Kaplan's inexplicable decision not to allow any testimony related to Chevron's contamination of the Ecuadorian Amazon – the actual issue here and disaster from which all this started – there's a lot that will never be discussed in the courtroom.

Unfortunately, there's even more going on here than a Chevron-friendly judge misusing his power to the detriment of 30,000 long-suffering people in Ecuador. This is the furthering of a strategy that corporations will continue to develop to crush the free speech of critics and limit our chances to fight back on anything resembling a level playing field. This RICO suit and everything Kaplan has allowed Chevron to get away with in its wake is a serious threat to open society and due process of law.

In 2010, before the Lago Agrio court had even issued a judgment (which Chevron now claims was "ghost written" by the legal team for the Ecuadorians), U.S. Federal Judge Lewis Kaplan had already made up his mind about the case. By issuing a worldwide injunction (later overturned by the 2nd Circuit Court of Appeals) Kaplan began a twisted journey through the looking glass and dragged the United States with him. Based on Chevron's trumped-up charges pieced together from edited Crude outtakes and thousands of emails between an international team constantly battling Chevron pressure tactics, Kaplan decided that a fraud had taken place and encouraged Chevron to file a RICO suit.

Kaplan has never been to Ecuador, knows nothing about its legal system and didn't even consider key evidence or hold a hearing to determine the facts. He doesn't even speak Spanish. His order, according to Professor Burt Neuborne, an extremely well-regarded human rights and civil liberties lawyer who is also the Legal Director of the Brennan Center for Justice at NYU Law School, "[sent] an unmistakable message of American judicial arrogance to the rest of the world that can only result in increased levels of reciprocal judicial suspicion and hostility, with negative consequences for the transnational rule of law."

There will more than a few law journal articles about what Kaplan has done here (much of which is in direct contrast to some of his prior rulings). But here are just a few highlights of the violations of civil rights and perversion of legal power Kaplan allowed or encouraged:

Each of these pieces of Chevron's scorched-earth legal strategy is part of a specific approach to suppress free speech, scare off supporters, create and expand negative rumors, to divide and conquer the opposition. It's already been criticized by criminal defense lawyers familiar with RICO as a way to "send a message to a lawyer who wants to take up a cause for an underdog that Big Brother, the big corporate entity, is going to start coming after you for criminal conduct."

Even with Kaplan clearly on their side, Chevron does still have to do some of the work. There's a significant difference in the law between extortion by force and extortion by pressure. One allows a meritorious claim as a defense and the other doesn't. Yet, if the trial record does not allow for evidence of the reasons Donziger and the LAPs initially filed their suit – the toxic contamination – how can anyone make a judgment on whether their claims against Chevron have merit? Chevron has to affirmatively prove that the LAPs have no right to recovery, yet they never submitted any evidence related to the actual contamination.

If you cut through the theatrics that have little or nothing at all to do with the claims, Chevron is left with absolutely nothing more than a triple hearsay statement from an admitted liar and corrupt judge, who was paid more than $300,000 by Chevron for his testimony. There's not a single piece of evidence to prove in even the slightest that Judge Zambrano did not write the verdict. Everything Chevron has introduced has been done so to suggest that something nefarious happened without actually proving the claims. Mix that with Kaplan's attitude towards Donziger and all things Ecuador and you have a show trial and nothing more.

Even Kaplan himself appeared frustrated that Chevron's lawyers have not made his task easy by giving him a solid case to base his judgement upon. That is why they dropped the damages claim to ensure no jury would ever hear their case – they'd never swallow it. Nevertheless, most are confident Kaplan will complete the task he set out before the Lago Agrio judgment was even issued – he will hand Chevron a ruling they can tout to anyone who will listen.

Truth is stranger than fiction. These events would seem too outlandish to be true had I not witnessed them with my own eyes. And that is exactly what Chevron is hoping for. They will use Kaplan's verdict for years to come (though the verdict itself will inevitably be faced with legal problems that will likely cause it to fall apart quickly under appeal), and possibly spend billions more hoping empty words based on lies and manufactured "facts" will drown out the voices of the tens of thousands who continue to live with the harsh reality of Chevron's despicable acts in the Amazon.