Retaliation Trial Opens Against Victims of Chevron Contamination in Ecuador 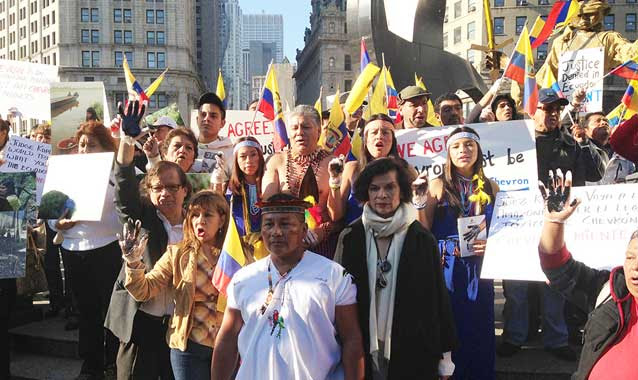 Today in New York Ecuadorian villagers from the Amazon rainforest region ravaged by Chevron's oil contamination were joined by supporters for a rally in Foley Square across from the courthouse where a trial opened in the California-based oil giant's retaliatory RICO lawsuit against the Ecuadorians and their U.S.-based legal advocates.


The Ecuadorians are representing 30,000 plaintiffs who won a landmark judgment against Chevron in an Ecuadorian court in 2011 in which the company was ordered to pay more than $18 billion for cleanup of widespread contamination, as well as compensatory and punitive damages. The case holding Chevron accountable for toxic dumping by its predecessor company, Texaco, has been upheld by appellate courts in Ecuador.


After nearly 20 years since the case was filed in 1993, Chevron still refuses to pay for a cleanup and is waging a scorched earth legal, PR, and lobbying campaign to crush its victims and their advocates and supporters. The oil giant stripped its assets from the country, forcing the Ecuadorians to pursue enforcement of the judgment in countries where the company maintains assets.


While Secoya indigenous community leader Javier Piaguaje continues to contest that the New York court can assert Personal Jurisdiction over him, he has traveled to New York to represent the tens of thousands of Ecuadorian plaintiffs who couldn't be there and defend them against Chevron's insulting allegations. He had this to say outside the courthouse in Foley Square today:


30,000 people were affected by Chevron's contamination and each day this number increases. Almost 30 years of criminal operation by the Chevron-Texaco oil company in Ecuador; more than 1,500 square miles of contaminated Amazonian rainforest; rising cases of cancer that almost always end in death; the suffering of our women for the great number of miscarriages; the devastation of the ecosystems and the destruction of thousands of species of plants and animals.


When Texaco arrived, we were expelled from our ancestral lands and two indigenous peoples went extinct. What the oil company brought to the Ecuadorian Amazonian was violence, death and destruction; meanwhile, the company got all the riches that the land offers at the cost of our lives, our health, and our home.


For this reason we continue our efforts to hold Chevron accountable, so that the company pays for all of the harm that it caused. We are here in New York now, where Chevron persecutes us and accuses us of being criminals and is supported by a judge who doesn't know our reality and suffering and hopes. Who are the real villains in this story?


We are outside this courthouse to tell the history that Judge Lewis Kaplan has refused to hear. Our misery is real and it will not cease to exist by a judicial process in New York, where Chevron hopes to avoid its responsibility with the collaboration of a judge that isn't even willing to validate the harm that we've had to endure. We come to denounce the abuse that is being committed in affected communities but also to tell them that we have already fought for 20 years and this RICO lawsuit will not stop us in our quest for justice.


The oil company has declared that it will fight us "until hell freezes over." Obviously our economic conditions are not the same; they can buy justice, we cannot. Because of this we must unite to fight against a giant that understands money, but not values like solidarity, truth, fellowship, and above all, justice.


Our fight is to keep the Amazon, the lungs of the planet, alive.


Our fight should interest the whole world.


We unite to make the world a place that is worth living in. The Amazon was one of those places. With your help, it can be again.


Forty-seven "named plaintiffs" – all of them indigenous rainforest residents and rural villagers – have been named in Chevron's lawsuit, which alleges that the entire case is a conspiracy to extort the company. Two of the Ecuadorian villagers, while rejecting the New York court's jurisdiction over them, have nonetheless appeared in the case in order to fight the allegations. Fearing a public backlash for suing victims of its pollution, Chevron has focused its smear campaign on New York-based human rights attorney Steven Donziger, who has advised the Ecuadorians in their efforts since first visiting the contaminated region in 1993.


The Ecuadorians and their supporters have called for an end to Chevron's retaliatory lawsuit, and are calling this latest effort a "rigged show trial" before a federal judge, Lewis A. Kaplan, who has displayed outright hostility to the Ecuadorians' legal efforts to demand a cleanup. Judge Kaplan has also made repeated disparaging on-the-record comments about Ecuador's judicial system.


Texaco operated in Ecuador until 1992, and Chevron absorbed the company in 2001, assuming all of its predecessor's assets and liabilities. Chevron has admitted to dumping nearly 16 billion gallons of toxic wastewater – the byproduct of oil drilling and pumping – into rivers and streams relied upon by thousands of people for drinking, bathing, and fishing. The company also abandoned hundreds of unlined, open waste pits filled with crude, sludge, and oil drilling chemicals throughout the inhabited rainforest region. In other countries at the same time as it was operating with no environmental controls in Ecuador, the company re-injected wastewater and used other easily-deployed technologies to deal with the toxic byproducts of its activities.


Multiple independent health studies have shown an epidemic of oil-related birth defects, cancers, and other illness. It is estimated that the contamination has directly led to at least 1,400 deaths.

For more on the campaign to hold Chevron accountable for its abuses in Ecuador: ChevronToxico.com


For more on the impending trial in Chevron's retaliatory lawsuit: StevenDonziger.com