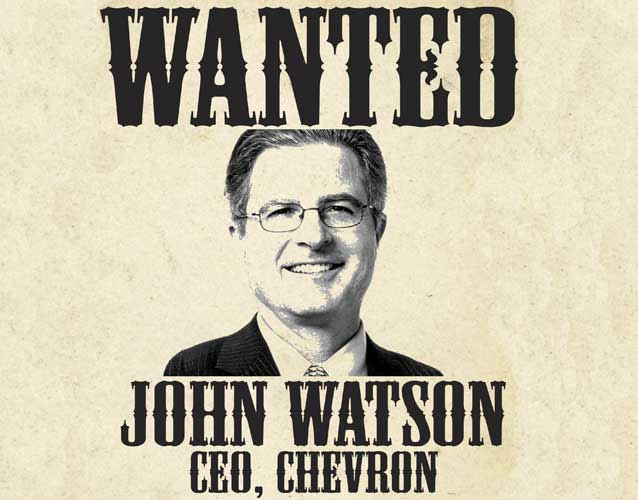 Bad two weeks for Chevron and its head-in-the-sand CEO John Watson. First, last week the San Francisco Chronicle reported that Chevron is under criminal investigation by the EPA for intentionally flaring contaminants and deceiving regulators. No accidental discharge, Chevron literally built a separate pipeline designed to circumvent monitoring equipment, belching contamination into the airspace above the densely populated city of Richmond, CA.

Then, as the Chronicle reported, the initial investigation expanded. And both of these aren't even related to the Aug. 6 refinery fire, which has already produced civil suits, and sparked a new probe from California legislators.

To top it off, Chevron got hit with an injunction by Brazilian courts on Sept. 27 ordering the company to stop operations within thirty days until the investigations of two oil spills off the coast of Rio de Janeiro are resolved. The oil giant was forced to pay $17.3 million in fines last week, and still faces up to $22 billion in potential civil suits.

But the sand is only so deep. Normally, when an executive makes a major mistake that threatens shareholder value and the financial health of the company, they get fired. Just ask the former head of JP Morgan Chase's chief investment office after losing $2 billion in a May trading loss. And now that the loss is ballooning towards $9 billion, some are calling for CEO Jamie Dimon's head. We also saw the resignation of Barclay's chief executive who succumbed to intense shareholder and political pressure over an interest rate setting scandal, with questions about the bank's corporate culture in the daily headlines.

But, far from the cutthroat world of Wall Street in the idyllic valley of San Ramon, CA, things are apparently done differently. Here, at the Chevron Corporation (NYSE: CVX) if you make an $18 billion mistake, you get a promotion. What?

Just look at John Watson, Chevron CEO. Watson rose through the ranks of the US's second largest oil company, cutting his teeth as vice president charged with mergers and acquisitions. He orchestrated and oversaw what was thought to be a major coup for his career ascension and potential pillar of his legacy – the purchase and integration of Texaco for $36 billion.

But what Watson overlooked, underestimated, or outright ignored, was the ongoing litigation against Texaco brought by Ecuadorian indigenous people and settlers for egregious environmental crimes and rights abuses. With its purchase of Texaco, Chevron inherited this liability. And now, under Watson's watch as CEO, this legacy has turned into a $19 billion judgment against Chevron, with asset seizure efforts underway in Canada and Brazil, and potentially more to come.

Chevron management, entrenched as ever, has lost control of the case. The guilty verdict against the company has gone global, leaving the confines of a small Amazonian courtroom in Ecuador's rainforest (where Chevron has no assets) to countries critical to its existing production and upstream growth. Chevron's global reach has always been touted as an advantage, but the company suddenly seems very exposed as the rainforest residents contemplate actions in any number of the 120 countries where Chevron has assets. And yes, that's $19 billion – roughly half of what Chevron paid for Texaco. Talk about buyer's remorse.

You'd think someone like Watson would be familiar with Peter Drucker's "Five Deadly Business Sins." Drucker, who BusinessWeek dubbed the "man who invented management", lays out five business mistakes that can sink even the mightiest of companies. Sin #5 has Watson written all over it: Feeding problems, starving opportunities.

Watson, perhaps in a vain attempt to cover up his egregious error in not factoring in the litigation to Texaco's sale price and gross mismanagement of the case along the way, has doubled down. During his tenure, Chevron has employed some 39 law firms on the Ecuador issue – billing what one can only guess is in the hundred of millions a year, cutting checks to the tune of $75 million a year to DC lobbyists deployed to Capital Hill to persuade lawmakers to punish Ecuador and strip it of its unique trade preferences with the U.S. for allowing the case to proceed. The latter failed spectacularly.

In the meantime, experts have started to chime in. Fidel Gheit, the top energy analyst for Oppenheimer – after years of silence on the issue – has started to speak out. He made a personal visit to Chevron's San Ramon headquarters to meet with Watson. Speaking about recently setbacks the company has faced in the case, Gheit commented, "[Watson's] not a happy camper right now. It's not great news for Chevron..." Gheit also stated that he thought Chevron should seek to resolve the litigation through a settlement, because it has become a "distraction" and drag on Chevron's stock price. A New Yorker blog entitled "Why Chevron Will Settle in Ecuador" suggested the same. And, an influential investor website suggests a "hold" on Chevron stock due in part to its failure to resolve the issue.

What does this mean for CVX shareholders? Stay tuned for Part II...