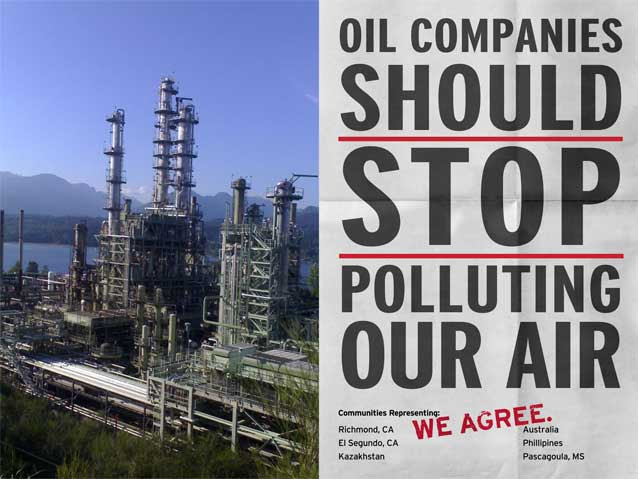 For those of you who follow the landmark Aguinda v. Chevron lawsuit and the efforts of thousands of indigenous people and farmers to hold the San Ramon oil giant to account for one of the worst oil disasters on the planet, it would come as no surprise to read that Chevron:

...routed hydrocarbon gases around monitoring equipment and allowed them to be burned off without officials knowing about it.

But what's striking about that statement is that it's not in reference to the company's rainforest operations in Ecuador in the 1970s and 1980s. It's referring to Chevron's oil refinery in Richmond, CA. In 2012.

Turns out, Chevron is now under criminal investigation by the EPA for this intentional effort to deceive regulators. The Sunday edition of the San Francisco Chronicle reported:

Federal authorities have opened a criminal investigation of Chevron after discovering that the company detoured pollutants around monitoring equipment at its Richmond refinery for four years and burned them off into the atmosphere, in possible violation of a federal court order, The Chronicle has learned.

Air quality officials say Chevron fashioned a pipe inside its refinery that routed hydrocarbon gases around monitoring equipment and allowed them to be burned off without officials knowing about it.

Some of the gases escaped into the air, but because the company didn't record them, investigators have no way of being certain of the level of pollution exposure to thousands of people who live downwind from the plant.

...The federal investigation centers on Chevron's burning, or flaring, of gases created during the superheating needed to generate fuels from crude oil. Although flaring burns most gases, environmental groups have long maintained that residual gases blowing away from the refinery pose a risk of cancer and respiratory ailments

The federal probe began before the explosion and fire at Chevron's Richmond refinery on Aug. 6, and underscores the company's notoriously lax environmental standards and its callous disregard for environmental protection and responsibility.

As the Contra Costa Times reported, local government officials are outraged at the news:

"How do we ever trust them about anything now? That's where I am," said Richmond Councilman Jeff Ritterman. "Once you are lied to once by somebody, it's very hard for them to establish trust."

"That's a criminal act, intentionally bypassing the monitoring," said Contra Costa Supervisor John Gioia, who is also the chair of the air quality board. "The rule is designed to reduce flaring, and refineries are supposed have a responsibility to abide by it."

If Chevron is brazen and arrogant enough to hatch a plan to deceive regulators in 2012, in the state with arguably the toughest environmental standards in the United States, then imagine what it was doing in the remote Ecuadorian rainforest from 1964-1990.

Unfortunately, the disaster in Ecuador is not something of the imagination. It's all in the case file – some 200,000 pages and more than 64,000 water and soil samples in an 18-year litigation that found Chevron guilty and liable for $19 billion in damages.

In Ecuador, Chevron's operations were built to spill. The company designed, built, operated and maintained an oil extraction system intended to dump toxins and pollution into rainforest rivers and lands – the life source of the indigenous and campesino inhabitants – in violation of both Ecuadorian law and standard industry practice. Chevron's type of drill and dump practices had been outlawed in the U.S. for years, and it even had a patent for technology to better dispose of the toxic waste produced by its operations. But Chevron chose not to use that technology in Ecuador. Why?

It was a cold calculus based on one thing. Cash money. To save a couple bucks, Chevron designed an oil extraction on the cheap, using outdated technology that it knew would harm people and the planet. It wasn't a "mistake". It was premeditated, criminal intent. This was executives and engineers sitting around conferences tables, diagraming dangerous deeds on chalkboards, mapping out their crimes against humanity and ecosystems. [I can't confirm whether evil laughter took place, or whether these meetings were followed by long, extravagant Mad Men style lunches with stiff drinks, big steaks, and inappropriate flirting with secretaries. But it was the 1960s.]

These decisions went on for years, and were the subject of memos that show Chevron knew about the human and environmental costs of its operations, but chose profit over people:

Should oil waste or toxic formation waters be re-injected back into the ground? Instead, leave them in waste pits adjacent to streams and tributaries, and build an overflow pipe to carry the contaminants directly to the water source of thousands of people.

Should fences be put around the superfund-style toxic waste pits so animals or children don't fall in? No, too expensive.

Should the pits be lined to prevent leeching into groundwater or migration of contaminants to rivers or streams? No, too expensive.

Should records be kept of any spills? A 1972 memo orders all reports related to oil spills "are to be removed from the Field and Division offices and destroyed," that no reports are to be kept on a "routine basis," and only "major events" that "attract the attention of press and/or regulatory authorities," are to be reported.

And, don't forget about Brazil, where Chevron's recent spill from its Frade field off the coast of Rio de Janeiro has the company facing billions in criminal and civil liability. Like Richmond and Ecuador, Chevron intentionally misled investigators and disregarded regulations. Chevron underestimated the size of the spill, overstated the extent of the spill response, and tried to cover up the fact that it drilled deeper than the depth allowed by its contract – a potential reason for the blow out at the well site.

According to Fabio Scliar, the head of the environment unit of Brazil's federal police department that the deep water well "could not and should not have been drilled under the conditions presented in the area," adding that an "absurd" amount of pressure was used at the site situated off the coast of Rio de Janeiro state. "All indications are that a desire for profits led (Chevron) to take the prohibitive risk" of drilling at the site, Scliar concluded.

Environmental Minister Carlos Minc added, "There was an environmental crime. They hid information and their emergency team took almost 10 days to start acting."

Chevron's Richmond, Ecuador, and Brazil examples [and there are many more] illustrate a premeditated pattern to pollute, and a reckless flaunting of the law that has endangered human health and environment. These examples are also growing liabilities that highlight a pattern of egregious mismanagement by senior executives, which is increasingly apparent to Chevron's own shareholders. Although U.S.-based investor groups have long been pressing the company to clean up its act, global investors are now taking notice.

Chevron's aggressive and much criticized management of the Ecuadorian case together with allegations of inadequate disclosure of the risks stemming from the case has highlighted a number of long-standing governance issues at the company which many believe are contributing to an unwise refusal to re-evaluate strategy. These include a lack of environmental expertise among independent directors, the combined role of CEO and Chairman, and restrictions on shareholders calling special meetings.

Chevron's repeated dismissal of valid shareholder concerns highlights the importance of international shareholders engaging with the company about these issues and supporting shareholder proposals to improve governance.

By all accounts, Chevron believes it is above the law. Help us bring this fugitive of justice to account!