Taking it to Chevron's Doorstep 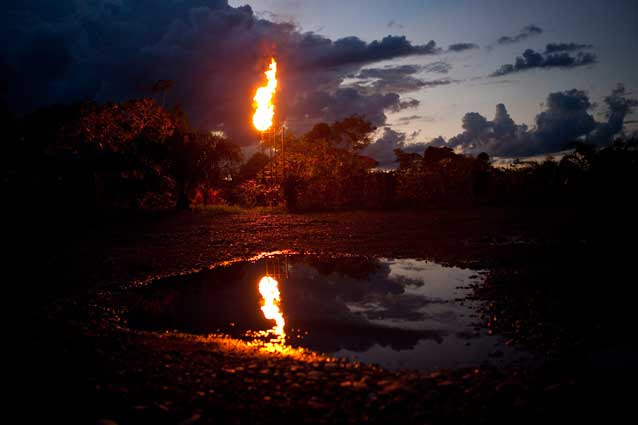 
Tomorrow, May 30, Chevron will be practicing the elaborate rite of corporate public relations known as the Annual General Meeting for shareholders. At the company's headquarters in San Ramon, California, there will be plenty of image-buffing and apple-polishing for top executives and the board of directors, plus praise for the company's obscene profits.


Of course, denial of reality also will be part of the show. Chevron executives are likely to make only passing mention of their dire legal situation internationally, from Ecuador to Brazil to Nigeria, where the company faces tens of billions of dollars in fines for environmental crimes.


That's where Amazon Watch comes in. As in previous years, we will be accompanying indigenous leaders from northeastern Ecuador to speak truth to power.


Here are their stories: 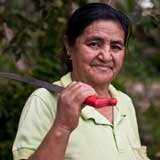 Luz Cusangua, 60, is a farmer from area of the Sacha oil field, which was developed by Texaco (now Chevron) in the 1970s and 1980s. After she moved with her family to the Ecuadorian Amazon from the highlands region of Ibarra in 1975, she witnessed firsthand the destruction of the tropical paradise as oil operations expanded around her. The river Wilya, which her family used for bathing, washing clothes, fishing and drinking, became a source of poisons. Her children suffered from various illnesses including skin diseases. Her mother was diagnosed with skin cancer, which was attributed by health professionals in the area to oil contamination.


The nearest well is a scant 100 meters from her home. To this day, the river Wilya remains contaminated.


Luz is the mother of five children and seven grandchildren. Her husband is deceased. Despite the contamination, she has managed to create a sustainable ecological farm, including coconuts, cacao, coffee, heliconia, orchids, medicinal plants and Amazonian fruit trees. 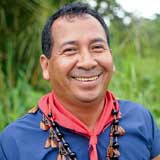 Robinson Yumbo, 39, is the president of the National Indigenous Federation of the Cofan People (FEINCE). Born in Lago Agrio, the oil town founded by Texaco, Robinson has lived his entire life in the community of Cofan Dureno along the shores of the AguaRico river. As a child, he witnessed firsthand the environmental devastation caused by Texaco's (now Chevron's) operations in the ancestral territory of the Cofan people. What was once the Cofan people's ancestral territory was transformed by Texaco (Chevron) into a massive oil field, characterized by continuous spills, the deliberate dumping of toxic wastewater into rivers and streams, and 24-hour flaring of natural gas.


Robinson witnessed the onset of a public health crisis within the Cofan community, including spontaneous miscarriages, birth defects and cancer. Texaco's oil operations also opened up the Cofan territory to uncontrolled migration, in the form of homesteading colonists, a phenomenon that led to large-scale deforestation (illegal mining and logging operations), the reduction of ancestral territory, the loss of game, and severe cultural threats.


Luz and Robinson will be joining other grass-roots leaders from California, Kazakhstan, Nigeria, Australia and the Philippines who will participate in a public teach-in Tuesday night on the True Cost of Chevron. The event, at the David Brower Center in downtown Berkeley, is from 6:00-8:00 pm.


The next morning, they will be face to face with Chevron executives inside the shareholder meeting. Also speaking truth to power at the meeting will be a coalition of 40 institutional investors from the United States, Canada and Europe, with a combined total of $580 billion in assets under management. The coalition, which includes New York State Comptroller Thomas DiNapoli, sent Chevron a letter calling for it to settle its lawsuit in Ecuador, which has resulted in an $18 billion judgment against the company.


DiNapoli, is trustee of the New York State Common Retirement Fund, which owns 7.24 million shares worth an estimated $713 million in Chevron, issued a statement last week slamming the company: "The company's attempt to undo the court's verdict only keeps the case in the public eye and further damages Chevron's reputation. Chevron's actions are hurting shareholders as well as the indigenous people of the rainforest. I urge the company's leadership to settle the case and put this issue to rest."