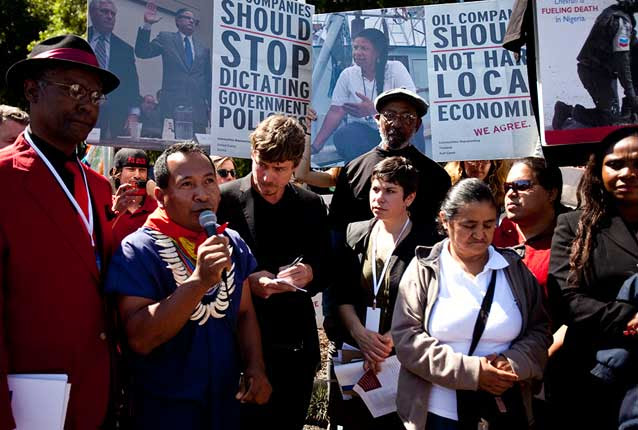 
At its Annual General Meeting in San Ramon on Wednesday, Chevron executives gave a good show – and a chillingly hard line. CEO John Watson told the assembled shareholders and activists from around the world that all was well, the company was raking in money and there was nothing to worry from those pesky multi-billion-dollar legal judgments and threatened fines against the company.


Watson showed a series of slick videos about Chevron's global business, including one purporting to show how the $18 billion Ecuador judgment against Chevron was a "fraud." For an in-depth and truthful expose on their disaster see chevrontoxico.com.


Pressed by shareholders and large institutional investors who urged Watson to settle the case, Watson dug in his heels and took the hardest line he has yet taken publicly in the 18-year-old case.


"We are resisting until Hell freezes over," Watson said. "We don't intend to pay criminals who seek to defraud your company."


Although the Ecuadorian rainforest communities who won the lawsuit are now preparing to seek court orders internationally to seize Chevron's assets, Watson said "no country that observes the rule of law" would do so.


He confirmed previous reports that the company was trying to do an end run around the lawsuit by cutting a side deal with Ecuadorian President Rafael Correa.


"We are seeking a dialogue with the government of Ecuador, but so far that has not moved forward."


Chevron's board of directors gave Watson frequent applause. One of those in the audience who was not so easily wowed by Watson's fancy videos was Luz Cusangua, a 60-year-old grandmother from eastern Ecuador.


"It's not so easy to wash your hands of this. I saw what you did in the 1970's. Mother Earth has been contaminated."


She continued, looking straight at Watson:


"This video is an insult to us. Chevron needs to pull up its pants and act like grown-ups, and accept responsibility for its mess in Ecuador."