The Trial and the Road to Justice 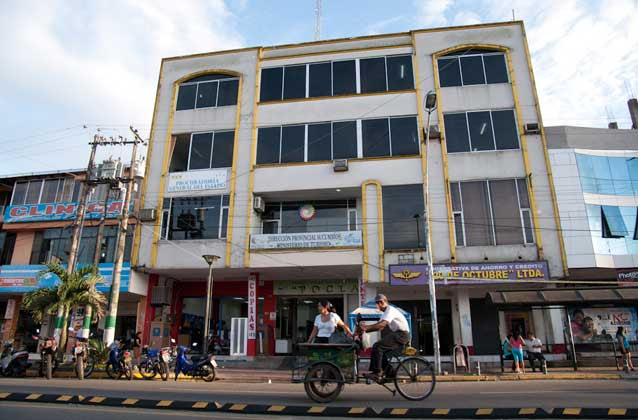 The courthouse stands four stories high along the main drag of Lago Agrio. Like all other buildings in the town, the weather has gotten the best of it; it is tropically dilapidated. The colors, off-white with yellow trim, are ruined; the cement shows signs of crumbling; and from up close the black mold appears to be winning against all else.

The townspeople refer to the building as "la corte", though in actuality the court itself is only a series of offices on the third floor. The first floor is a credit agency, a copy and print shop, and an appliance store; the second floor is the government tourism office, full of brochures; and the fourth floor is a vacant, dark and unused terraza.

At the courthouse on the third floor, the people move slowly, deliberately. The air conditioning does not work. The air is stale and sticky. Just as any other provincial court, there are the usual characters – the judges, prosecutors, defenders, administrative workers – who shuffle in and out of rooms, swamped with any number of local civil or criminal cases. There are also, of course, the plaintiffs and the defendants, who come and go, huddle with their lawyers, wait, come and go again, always hoping never to return. In general it is an average courthouse scene.

Emergildo Criollo, leader of the Cofan people, is always there though; he never goes; he is always watching and observing. He is one of thousands of indigenous people and campesinos who have been waging a historic lawsuit against American oil giant Chevron for environmental crimes in the Amazon rainforest. For the last two years Emergildo's job has been to monitor the courthouse, and ensure that there are no improper meetings taking place between Chevron lawyers and courthouse staff or judges. Sometimes, to pass the time, he will make jewelry out of forest seeds and purchased beads. At other times he will make phone calls, but he never has enough credit in his phone to talk for too long. He arrives at 8 am just when the court opens; he leaves at 6 pm just when the court closes. 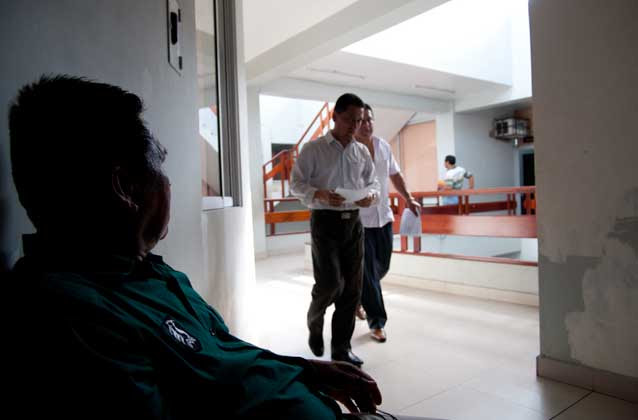 Several weeks ago as we were sitting together in the courthouse he gestured at the unnatural lighting and the strange angles of the building, and told me that when he was a boy this was all forest. "We are sitting where the monkeys used to make their homes" he said.

Outside the courthouse is the bustling life of downtown Lago Agrio. Crowds, bicycles, carts, cars, buses, 18-wheelers. Everything and everyone seems to move in concert. In this photograph, taken yesterday at 6:30 am, court workers load more than 200,000 pages of court filings and evidence from the historic Aguinda v Chevron case into a colorful court-chartered bus – all under the spirited and watchful eye of los afectados por Texaco (the people impacted by Texaco) The entire trial record was transferred yesterday to Ecuador's National Court of Justice in the Andean capital city of Quito. After eight years in the Lago Agrio court Chevron was found guilty in February 2011 for massive environmental crimes in the Amazon and fined upwards of $18 billion. In January of this year an Ecuador appellate court confirmed the $18 billion judgment against Chevron. The plaintiffs are now seeking to enforce the judgment in countries where Chevron has assets, while the high court in Quito will review Chevron's final appeal in this epic legal battle. 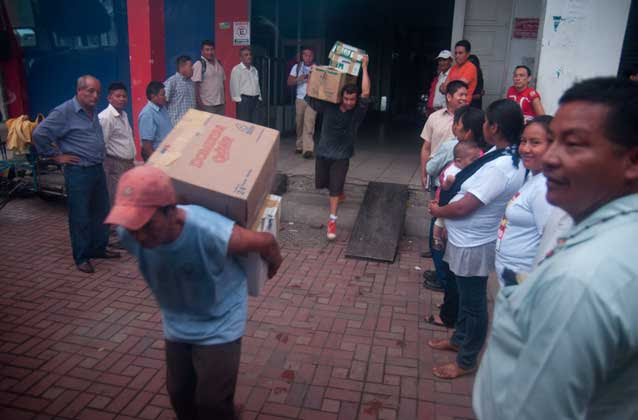 There are approximately 30,000 Ecuadorian plaintiffs in the legal battle against Chevron, all still living within Texaco's former oil concession area. Yesterday, community members from four indigenous tribes (the Cofan, Siona, Secoya and Quichua) and dozens of campesinos from rural towns throughout the region rented a bus to accompany and monitor the transfer of the legal case from the court in Lago Agrio to Quito – an important and symbolic moment in the 18 year legal battle against the American oil giant. 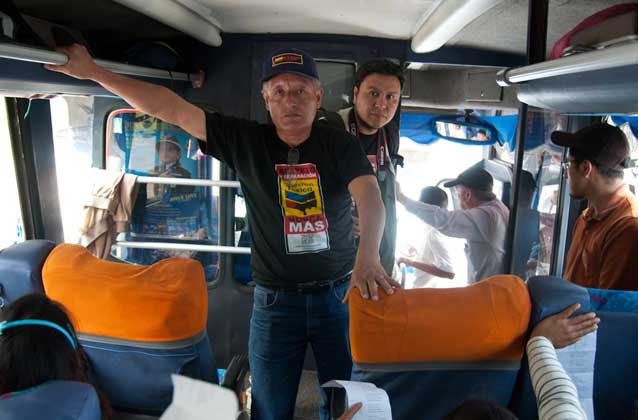 Ascending out of the Amazon rainforest into the Andean highlands, we followed the TransEcuadorian pipeline, which Texaco built in the early 70s. History was lost on no one: Forty years after Texaco began producing oil in the Amazon rainforest, more than 200,000 pages of evidence and court filings documenting the massive environmental and human health harm that the company's operations caused were now winding their way besides Texaco's pipeline on the way to the National Court of Justice in Quito.

Here in the highlands, a section of the pipeline is under repair. History has not been forgotten though; a message on the pipeline reads: Chevron-Texaco: Never again! 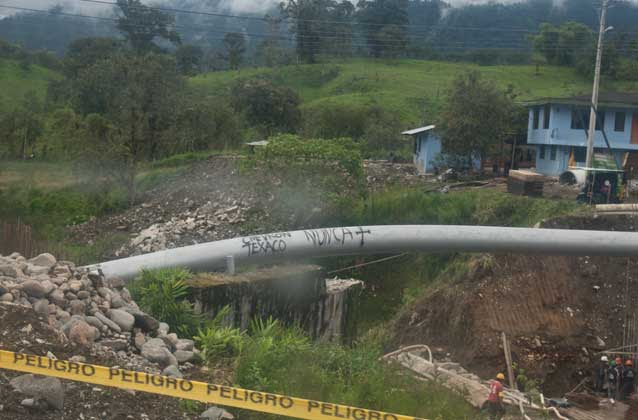 As our caravan reached the busy streets of Quito, we were met by a contingent of supporters from environmental and human rights groups, such as Accion Ecologica, Oil Watch, Pachamama, INREDH and CONAIE, who promised to join in helping monitor the trial process in Quito. Pablo Fajardo, the lead Ecuadorian lawyer in the legal case was leading the way. 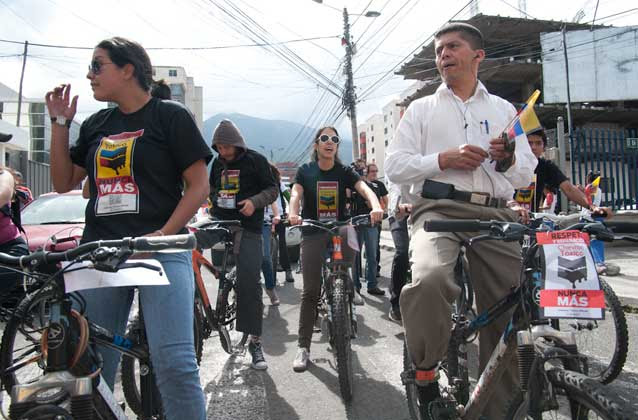 Swarmed by press, the leaders of the lawsuit against Chevron make their way to the steps of the National Court of Justice for a press conference, where they will affirm their resolve to continue fighting for justice. After eight years of monitoring the trial process in Lago Agrio, the communities announced yesterday that they will continue their vigilance of the trial in Quito. 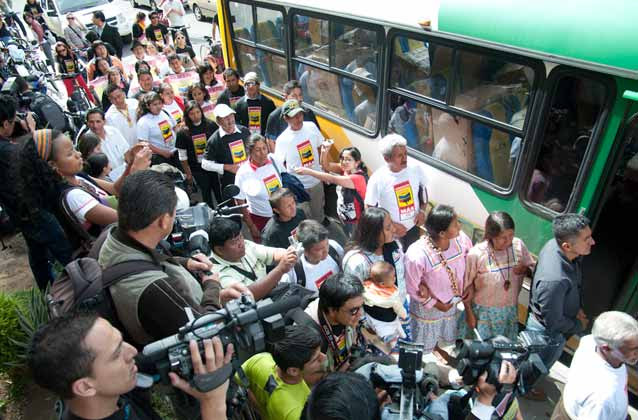 Maria Aguinda is a Quichua woman from the town of Rumipamba. She is the lead plaintiff in this lawsuit, Aguinda v Chevron. Her home in Rumipamba stands beside a clogged and contaminated stream from a Texaco oil spill in 1976. Here, 18 years after filing the lawsuit against Texaco, she stands on the steps of the National Court of Justice, and again reminds the world of what the American company did to her rainforest homeland. 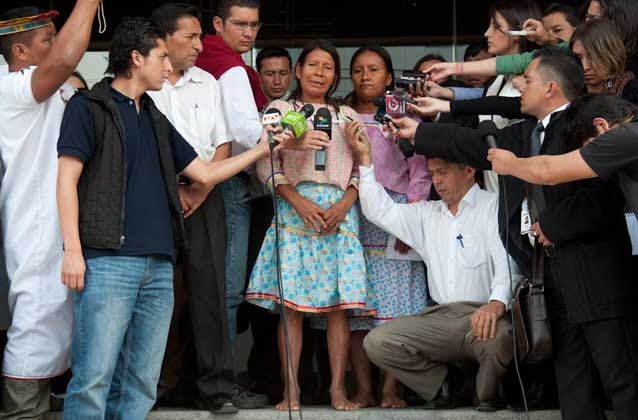 More photos of the transfer to Quito, taken by Kevin Koenig: