This morning I accompanied Emergildo Criollo, leader of the Cofán people, from his home in the dusty outskirts of Lago Agrio (the oil camp turned boom town that Texaco founded) to a press conference in Quito regarding a ruling issued late yesterday afternoon by the Appellate court in Sucumbios rejecting Chevron's latest attempts to block enforcement of the $18 billion judgment against Chevron for massive environmental crimes in the Ecuadorian rainforest.


6:15am: Torrential rain in Lago Agrio. Dim grey sky. We are standing outside the Lago Agrio airport, only 1/2 mile from the well site Lago Agrio 1 where Texaco first struck oil in 1967, setting in motion decades of industrial scale oil operations that would lead to one of the largest environmental disasters on the planet. Emergildo is silent. The airport has yet to open. Suddenly, as if a memory appeared to him in the distance, he begins to recount:


"Sometimes I don't recognize my own territory, Mitch." We are looking out at the pavement of the parking lot. "I remember I was six years old, and we had seen the helicopters in the sky (we thought they were metal birds), and then we went to where they landed. We heard awful noises there. And there were white people with big machines that we had never seen before. They were doing all sorts of strange things there…strange things…cutting down the forest, setting trees on fire, making explosions; and there were smells that we didn't recognize. Bad smells. And we didn't know why they were destroying the forest. What were they looking for?"


7am: We are worried about the weather conditions. It is still raining outside. We are inside the airport now drinking Nescafe with sugar. I ask Emergildo about the first time he drank coffee:


"We never knew that coffee existed. We drank Yuku which is better than coffee. It is much stronger. And it has a better taste. It is a vine that we know in the forest. You scratch it and put it in water. Not hot water. Cold water. We used to drink it at 4am in the morning before the light. We would all go to the river together, always together, 10-15 people, and we would drink Yuku and gather strength for the hunt."


7:45am: The rain is relentless. The legal team in Quito tells us that if our plane doesn't depart by 9am we will miss the press conference. I look at Emergildo in the bewildering unnatural light of the airport, the way his blue tunic hangs over dress pants and dress shoes; how he is adorned in plastic beads and rainforest seeds; how he tells me that "the journalists like to see me dressed up traditionally"; how when we arrive in Quito he will have to sift through the complicated (and totally alien) legal matters upon which a part of the destiny of his people depends. And I am struck with a kind of nausea at the astonishing cruelty of history. And a question: Can there be justice amongst human beings on this planet?


9am: The rain relented. I am reviewing legal documents on the plane. We are lost in the grey darkness of the sky, climbing out of the forest into the Andes.


I am thinking about the notion of legal justice. I want to briefly and simply summarize what is happening in the 19th year of this environmental litigation, which pits Emergildo (and 30,000 other indigenous people and poor homesteading colonists) against one of the largest multinational corporations on the planet. I have 15 minutes before the plane lands.


Chevron lost the trial in Ecuador. In February of 2011 a court in Lago Agrio found the company guilty of massive environmental crimes and issued an $18 billion fine against the company. Chevron decried the judgment a product of fraud, maligned the entire Ecuadorian judicial system, filed a RICO action against the affected communities and their lawyers, leveraged sympathy from a pro-corporate imperialist judge in New York to block the plaintiff's ability to enforce the judgment in jurisdictions around the world; ramped up their scorched earth public relations strategy seeking to dry the plaintiffs lawyers of resources; and continued to seek pitiful refuge in a an obscure private arbitration panel (consisting of three lawyers who stand to gain millions from trying the case), and requested that this panel render the entire 18 year litigation process (and the hopes of Emergildo) null and void, and that the Ecuadorian Government pay Chevron's $18 billion in damages. Or to put it more succinctly, Chevron has attempted to use its money, power and influence to crush the very communities that their predecessor company Texaco poisoned over the course of more than two decades of operations in the remote Amazon rainforest.


Chevron's strategy, though impressive in its breadth and cunning, has not reaped the results it was hoping for. The company was laughed out of court in May by the second circuit court of appeals for their attempt to block the plaintiffs ability to enforce the Ecuadorian judgment around the world. The original ruling in Ecuador, as I mentioned, was ratified by a higher court in Ecuador. And the plaintiffs continue to build their strategy to enforce the $18 billion judgment against Chevron in countries around the world where the company has assets. 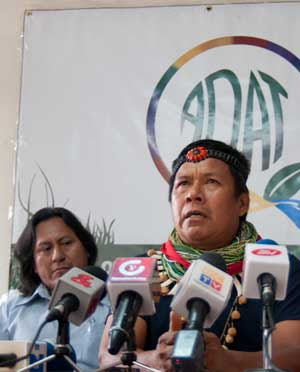 9:45am: The press conference begins at 10am. We are in taxi near Plaza de los Torros. Emergildo is nervous that we are going to be late. I tell him that they won't start the press conference without him. He asks me why "three people in the United States" (i.e. the private arbitration panel acting under the mantle of the US-Ecuador Bilateral Investment Treaty ) would "ever think they have the right to end our legal case against Chevron?" He then tells me, "I'm glad that our court in Ecuador is strong and won't let that panel hurt our chances."


We are silent for a couple minutes. He then says, with a renewed sense of calm, "Did you know that the first time I came to Quito was 1973? I was invited by the Summer Institute of Linguistics to help translate the bible into." I think to myself, there should be some sort of American expression: First your soul, then your oil.


10:05am: All of the major Ecuadorian media outlets are present. This is going to be a highly legal affair. Discussions about jurisdiction; international law, global enforcement actions. It is Emergildo's turn now to speak. I am wedged up in the front, tangled in the tripod legs of several video cameras, hoping to get a good still of Emergildo.


And his voice trembles for a second, and then he says with strength: "I am Emergildo Criollo of the Cofán people, and I am proud to be here today."


And I think, Yes, nothing more needs to be said. And I take a still photograph of dignity incarnate and set my camera down.