Yesterday, a 3-judge panel from the 2nd Circuit Court of Appeals dealt a stunning blow to Chevron's abusive and deceitful efforts to evade accountability for its oil disaster in Ecuador.

The appeals court threw out U.S. District Court Judge Lewis Kaplan's injunction that purported to prohibit the Ecuadorian plaintiffs from enforcing the $18 billion judgment against Chevron delivered by an Ecuadorian court in February. It also indefinitely stayed a trial that Judge Kaplan had scheduled for November over a preposterous countersuit filed in his court against the Ecuadorians and their attorneys, at which Chevron hoped to have the Ecuadorian verdict against the company declared unenforceable. The preliminary order from the 2nd Circuit came just one business day after a hearing before the panel on Friday, Sept. 16th, and said that a full ruling looking at the various issues will come "in due course."


Amazon Watch founder and Executive Director Atossa Soltani appears on Democracy Now! with Amy Goodman to discuss the implications of the Ecuadorian plaintiffs' victory in the appeals court.


As legal reporter Alison Frankel writes in her On the Case column:

Monday's stunning two-page order from the panel gave the Ecuadorean plaintiffs their first victory in two years of battling in New York's federal courts. But it was a huge win.

The appeals court order constitutes a harsh rebuke to Judge Kaplan's over-reach in the case, making him Chevron's most valuable legal asset in the company's dirty fight to avoid responsibility for its pollution in Ecuador. The appeals panel didn't remove Judge Kaplan, as requested by the Ecuadorian plaintiffs, but as Marco Simons, legal director for EarthRights International writes on his blog:

"... the appeals court declined to remove Judge Kaplan, who the Ecuadorians believe is biased against them, from the case. But it's possible that, after the court issues its opinion, there won't be any case left for Kaplan to preside over."

The ruling also dealt a humiliating rebuke to the strategy driven by outside law firm Gibson Dunn, and Crutcher law firm and lead counsel Randy Mastro, who was literally laughed out of court at the hearing which led to the order.

After attending hearing after hearing at which Mastro made sweeping fraud and conspiracy allegations against the Ecuadorians and their lawyers supported by the flimsiest of fantasy, theory, and conjecture, it was truly a breath of fresh air for this author to watch the Gibson Dunn lawyer wither at questions from the appellate panel based in logic, common sense, and the rule of law.

We can now at least dream there will be justice and compensation for the damage, the environmental crime, committed by Chevron in Ecuador.

More than anything, the order from the appeals court represents the most stinging rebuke to the arrogant and deceitful strategy employed by the cabal of lawyers, spinmasters, and seriously-conflicted executives running a mini Orwellian empire within the company devoted to characterizing the Ecuadorian plaintiffs as criminals, and painting the company that poisoned them as victims. They thought overwhelming evidence of the company's crimes in Ecuador could be beaten back with shameless cynicism and an astonishing outlay of cash.

Even 2nd Circuit appeals court Judge Richard Wesley wondered aloud how much money had been spent by Chevron to pursue its legal strategy, and at what cost to shareholders.

Regulators, politicians, institutional investors, and shareholders who have heard Chevron management deny that the company faces any significant liability in Ecuador are going to be asking the most difficult questions that Chevron's lawyers and leadership (if one can call it that) have yet heard, now that the 2nd Circuit has affirmed the rule of law over Chevron's deceptive sensationalism.

Will Chevron management "face reality" as New York State Comptroller Thomas DiNapoli—trustee of the New York State's Pension Fund with $780 million in Chevron stock—demanded during this past May's Chevron shareholder meeting? Or will CEO John Watson, architect of Chevron's takeover of Texaco and the company's toxic legacy in Ecuador, and other senior management allow the entire company to be driven off a cliff by outside lawyers who have no interest in ending a legal saga that continues to line their pockets? 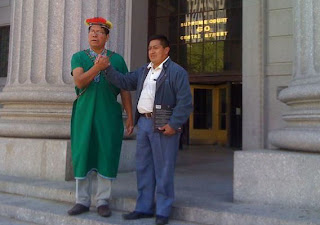 Secoya indigenous leader Humberto Piaguaje (L) and campesino communtiy leader Servio Curipoma (R)—who have both worked tirelessly to demand justice from Chevron—outside of a courthouse in New York on Sept. 16.

Either way, this decision brings the people of the Ecuadorian Amazon one step closer to justice, and we call on Chevron's management to do the right thing by meeting the company's moral, legal and fiduciary obligations to clean up its contamination in Ecuador. Of course, justice delayed is justice denied, and the men, women, and children of the Ecuadorian Amazon have suffered for far too long already.

BBC: 'US court rules against Chevron in Ecuador oil case'