Yesterday, hell did not freeze over. Pigs (or if you're Italian, donkeys) were not seen flying through the air on gossamer wings.

What did happen yesterday?

A major oil company accepted responsibility for terrible oil contamination affecting poor villagers in a remote part of a developing country, promising to pay for remediation of the damage done, and compensation to the communities harmed.

Stop the presses! Has Chevron finally seen the light? Will the California oil behemoth finally do the right thing?!

Actually, it wasn't Chevron in Ecuador. It was Shell in Nigeria.

In April, a lawsuit was brought on behalf of tens of thousands of people in and around the town of Bodo, in the Ogoniland region of the Niger Delta. They demanded clean-up of two massive oil spills that occurred months apart in late 2008 and early 2009, that devastated farmland and mangroves, and flowed into a large network of creeks and inlets, poisoning the drinking water and destroying the livelihood of this fishing community. 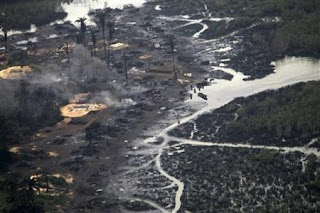 SPDC accepts responsibility under the Oil Pipelines Act for the two oil spills both of which were due to equipment failure. SPDC acknowledges that it is liable to pay compensation - to those who are entitled to receive such compensation.

Preliminary estimates suggest that Shell could be liable for hundreds of millions of dollars in cleanup costs and compensation for the communities living amidst the spills.

This hardly represents a solution to the plight of the people of Ogoniland and the larger Niger Delta, where oil operations have ravaged the environment and devastated local communities (see more on the report released today by the United Nations Environment Programme here, here, and here).

But we hope Chevron is watching this latest turn of events, with Shell stepping up in this case to do the right thing.

For the sake of the tens of thousands of people in the Ecuadorian Amazon who suffer from oil contamination like their brothers and sisters in the Niger Delta, we hope that Chevron will take a page from Shell's playbook; accept responsibility for the damage you have caused and get to work fixing it.

If you're not on the email list for Amazon Watch's Clean Up Ecuador Campaign, sign up now, and stay tuned for ways you can take action to demand Chevron takes responsibility for its disaster in the Amazon.