I just sent a message to Amazon Watch's email list of supporters, which has grown leaps and bounds in recent months. It includes a brief but powerful video-report on the recent delegation of Ecuadorians to the United States. Read on (and watch the video) below: 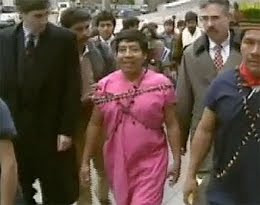 In 1993, Elias Piaguaje traveled from the Amazon rainforest to New York to represent the Secoya people of the Ecuadorian Amazon. He joined representatives of other indigenous tribes and campesino communities to file a landmark lawsuit demanding that Texaco – now Chevron – clean up contamination that devastated the Secoya people's rainforest homeland.

Last month, almost 18 years after this first visit, Elias' nephew Humberto Piaguaje returned to New York. A Secoya leader in his own right, Humberto traveled to New York and across the nation to press Chevron, once again, to clean up its toxic legacy.

But this time, he carried with him a historic verdict from an Ecuadorian court finding Chevron guilty, and ordering the company to pay to clean up its pollution, and to assist communities ravaged by the company's toxic legacy.


Amazon Watch and our Clean Up Ecuador Campaign was proud to support Humberto and his compatriots Servio Curipoma and Carmen Zambrano as they traveled to New York, Washington DC, and the San Francisco Bay Area, meeting with media, lawmakers, activists, Chevron shareholders, and everyday supporters to share their message. And everywhere they went, they were touched by the outpouring of support for their struggle.

Building up to Chevron's shareholders meeting, we've forged unprecedented alliances with shareholders who called on Chevron to change its abusive approach, and find a solution to its disaster in Ecuador. Powerful institutional investors publicly called for Chevron to settle the case. Reporters and business analysts and editorial boards amplified the Ecuadorians' message. And we found allies from the halls of Congress to the streets of San Ramon, CA, where Chevron is headquartered.

But this is no time to dial back our efforts. The company is still fighting to evade accountability, and with a landmark verdict against Chevron, we're that much closer to the tipping point. With your support, we can show Chevron that no company is above the law.

Please donate today to Amazon Watch's Clean Up Ecuador Campaign, and we'll continue ramping up our hard-hitting efforts in support of the 30,000 men, women, and children in Ecuador still courageously fighting for justice from an American oil company.

The original email is archived here.