Photo Essay from the Frontlines: Cultural & Environmental Destruction in the Ecuadorian Amazon

Yesterday, the excellent Matador Change blog published a new photo essay about Chevron's legacy in Ecuador by Amazon Watch's corporate campaigns director Mitch Anderson. Matador Change is the advocacy/altruism/social change part of the Matador Network, an online magazine devoted to travel and adventure. Check out the introduction to the photo essay and a few select photos, and then check out the rest over at Matador (link at bottom):

Descending from the Andes into the oil boomtown of Coca, the Ecuadorian Amazon, one of the most biologically diverse rainforests on the planet, stretches out as far as the eye can see.

Nearly half a century ago, this part of the rainforest was the pristine home of five indigenous groups – the Quichua, Cofan, Huaorani, Siona, and Secoya. In the early 1960s, American oil company Texaco discovered heavy crude oil beneath this jungle region, called the Oriente, or the East.

Over the next three decades of oil drilling Texaco (now Chevron) spilled an estimated 17 million gallons of oil, and dumped over 18 billion gallons of toxic wastewater into the rivers and streams relied upon by local residents for drinking and bathing.

The invasion of the region by oil workers wreaked havoc on the cultures of the indigenous communities while Texaco’s environmental devastation condemned the tribes to an ongoing public health crisis. The extensive oil infrastructure (opening roads to build oil wells and pipelines) propelled a massive colonization of the region by poor farmers from around Ecuador, who in turn would suffer from the same problems faced by the indigenous residents.

This is the first in a series of photo essays documenting the cultural and environmental destruction in this region of Ecuador by Chevron. The people who came to the region hoping for a brighter future in the wake of the discovery of oil encountered unsafe working conditions and exposure to toxic chemicals, and continue to live in the midst of a polluted environment that has caused an epidemic of oil-related illness throughout their communities. Photos by Mitch Anderson. 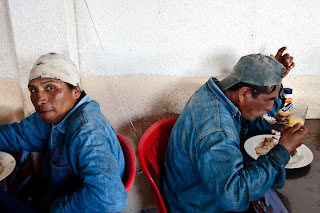 Two workers eating in a cafeteria in the town of Taracoa. Man on left: “I am one of the people affected by Texaco. During the times of Texaco, all the water of the forest was full of salt and toxins.” Man on right: “There is no other option but to work for the oil companies here.” 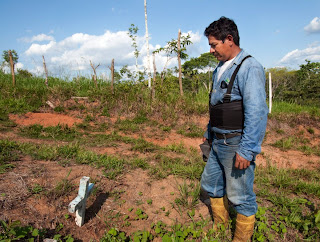 Antonio Jaime Yanan Gomez, 42, stands at the grave site of his daughter. Antonio arrived in the Oriente in 1982, and lives 500 meters from Yuca Central oil processing station, built by Texaco. Antonio’s daughter died when she was only a year-and-a-half old toddler. “She died from the contamination,” he says. Antonio works in oil tank construction for oil industry company ProinPetrol. 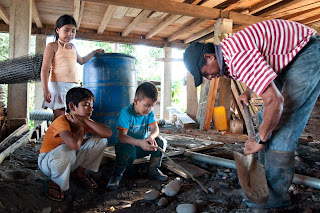 Nelson Alvarado, 46, arrived in the Oriente in 1981 and began working for Texaco. Beneath his home, he digs up crude oil, as his son, daughter, and a nephew look on. A Texaco pipeline ruptured, he says, covering his land in oil. 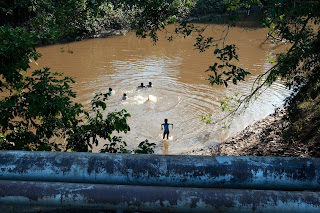 Children from the community of Taracoa swimming in a river that remains contaminated. In fact, say locals, their entire water supply is contaminated.

Check out the rest of the photos at the Matador Change blog.