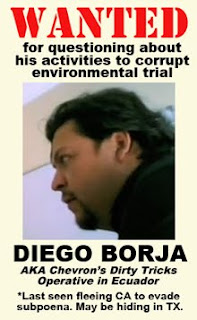 It appears that Chevron's self-described 'dirty tricks guy' in Ecuador, Diego Borja, who was recorded talking about his efforts to corrupt the trial over Chevron's contamination in Ecuador, is on the run to avoid questioning recently ordered by U.S. courts.

Borja and his wife, who was also implicated in the recordings, have apparently disappeared from the home near Chevron's headquarters in California, where they had been relocated by the company (and where Chevron paid their $6000/month rent) in the wake of their announcement about a contrived scandal that Borja had cooked up in Ecuador in an attempt to smear the judge overseeing the trial.

I've written a number of times here and at Huffington Post about Chevron's Diego Borja, and overwhelming evidence that he, along with his wife and an American con-man sidekick, helped Chevron corrupt the trial over the company's oil contamination in the Ecuadorian Amazon. Most recently, two U.S. Federal Courts ruled that Borja, his wife Sara Portilla, and the American, Wayne Hansen, would have to testify about their role in attempting to entrap and bribe the judge then overseeing the trial against Chevron in Ecuador, as well as evidence-tampering and other activities to corrupt the legal process. And now, after fleeing Ecuador and hiding out around the corner from Chevron's headquarters, they're on the run again.

Why are they on the run?

What are they afraid of telling the courts? Did Chevron help them to escape ahead of subpoena servers and scheduled depositions? As I've said previously, it's hard not to wonder what they could tell us about Chevron's involvement in years of efforts to disrupt and derail the trial.

What do they know about General Counsel Hewitt Pate and his involvement with schemes aimed at corrupting the Ecuadorian judiciary? How about former top lawyer Charles James, a lawyer for George W. Bush's Justice Department who was Chevron's GC at the time Borja was concocting the sting operation against the judge then overseeing the trial in Ecuador? What will Borja tell us about the Jones Day lawyers like Tim Cullen at whose San Francisco offices Borja had a meeting in the midst of his Nixon-style dirty tricks operation?

Or maybe Borja, Portilla, and Hansen are just worried about their own skin. In recorded conversations with a former friend-turned-whistleblower, Borja said that if Chevron didn't help him out, he could "immediately go to the other side... I have correspondence that talks about things you cannot even imagine, dude... I can't talk about them here, dude, because I'm afraid, but they're things that can make the [plaintiffs] win this just like that."

In the recordings, Borja also explained how he participated in "cooking" evidence in the trial and told him "crime does pay!" Borja explained how his activities would help the oil giant evade responsibility for massive environmental damage and contamination that continues to cause serious and widespread health problems for thousands of indigenous people and campesino settlers throughout the Ecuadorian Amazon.

In September, Judge Edward M. Chen of the U.S. District Court for the Northern District of California said that Chevron had "implicated" Borja as a witness to its claims against the courts in Ecuador, and ordered Borja to sit for a deposition by attorneys for the Republic of Ecuador, which is fighting Chevron's attempts to force the country into a binding arbitration. A number of legal analysts have agreed with the plaintiffs' charges that Chevron is trying to use arbitration to make an "end-run" around the litigation against the company and hopes to make the Republic –– and its citizens –– pick up the tab for the toxic mess the oil giant left behind. Borja's attorneys filed a motion to "quash" the subpoena and avoid providing testimony, but that was denied and Borja was ordered to testify.

According to a press release from the Amazon Defense Coalition, "Borja's sudden disappearance from California was discovered when lawyers for the indigenous plaintiffs attempted to serve subpoenas on him and Portilla commanding them to testify about their roles in falsifying evidence."

According to the release, Wayne Hansen, a shady American former drug trafficker and convicted felon who partnered with Borja in his dirty tricks operation against the judge then presiding over the monumental trial, has also disappeared. Hansen was most recently living in Bakersfield, California and is presumably fleeing the jurisdiction to avoid having to testify about his activities. In a meeting with the judge that Hansen and Borja videotaped using spy-pens purchased from a Skymall catalog, Hansen posed as a businessmen interested in contracts for environmental remediation should the plaintiffs prevail in the legal battle. He asked the judge more than a dozen times who he would be ruling for, with the judge telling him each time that he would only declare that in a final ruling.

Neighbors of Borja and Portilla told representatives of the Ecuadorian plaintiffs that they thought perhaps the couple had fled to Texas. And who knows where Wayne Hansen has disappeared to. But keep your eyes out for these people and help locate them so the truth about their activities – and Chevron's involvement in their efforts – to deny justice to suffering people in Ecuador can finally be known.

If you have any information about the whereabouts of Diego Borja, Sara Portilla, or Wayne Hansen, please contact our Chevron-Ecuador confidential whistleblower's hotline: 1-877-844-4114 or email chevron.whistleblower@gmail.com