Yesterday, a federal judge ordered Diego Borja, self-proclaimed 'dirty tricks' operative for Chevron in Ecuador, to appear for a deposition on October 1st in San Francisco.

According to a story in the legal newspaper the San Francisco Daily Journal, Judge Edward M. Chen of the U.S. District Court for the Northern District of California said that Chevron had "implicated" Borja as a witness to its claims against the courts in Ecuador, where Chevron is a defendant in a monumental lawsuit for causing widespread devastation in the country's Amazon rainforest region. 30,000 indigenous people and campesinos are attempting to hold the oil giant accountable for massive oil contamination from reckless oil drilling operations and the deliberate dumping of 18 billion gallons of toxic sludge into Amazon waterways relied upon by residents for drinking, bathing, and fishing.

As I wrote on this blog yesterday, last summer, Borja, a long-time Chevron employee in Ecuador who has been closely associated with the oil giant's legal defense in the environmental lawsuit, spearheaded an undercover sting operation against the judge overseeing the trial in Ecuador. Borja and a shady American former drug trafficker and convicted felon named Wayne Hansen posed as businessmen interested in contracts for environmental remediation should the plaintiffs prevail in the legal battle demanding Chevron clean up its oil contamination of the region. They secretly video-taped the jusdge and brought the tapes to Chevron executives who announced they had discovered a "bribery scandal" implicating the judge, only to see the story unravel upon scrutiny by the media, as well as Amazon Watch. The New York Times, reporting on the story, wrote, simply, "No bribes were shown in the tapes..."

As the Daily Journal reported, Judge Chen wrote in his order that:

"there is evidence ... suggesting that Mr. Borja was not an innocent third party who just happened to learn of the alleged bribery scheme but rather was a long-time associate of Chevron whom Chevron would pay for any favorable testimony."

Since cooperating with his long-time bosses in the cynical efforts to undermine the judicial process in Ecuador, Borja has been holed up in a $6000/month home just minutes away from Chevron's headquarters in San Ramon, CA. Chevron pays the rent on the house, as well as for Borja's high-profile (and surely expensive) criminal defense attorney, Cristina C. Arguedas, who represents such high-profile clients as disgraced former San Francisco Giants star Barry Bonds. In April, the Amazon Defense Coalition and Amazon Watch revealed a series of stunning admissions by Borja. A childhood friend of Borja's named Santiago Escobar, disgusted by Borja's bragging about his 'dirty tricks' for the company, recorded conversations and saved online chats in which Borja admits he "cooked" evidence in the trial and would reveal the damaging evidence unless he received enough money from Chevron for his 2009 sting operation.

Escobar's recordings of Borja were offered as evidence in the motion to depose Borja. Escobar also testified before the office of Ecuador's Prosecutor General (for which he received death threats).

Once again, while the legal drama is authentic, it is also only a sideshow compared to the real issues at the heart of this case. "Case" isn't even the right word. Try "tragedy" or "disaster" or "catastrophe."

Right now, while Borja is deciding whether to perjure himself to protect Chevron bigwigs and Chevron's PR hacks are figuring out how to spin this latest development, Marta (pictured below) and her family wait for relief. They are only a few of the tens of thousands of people who have suffered cancers, skin diseases, miscarriages and birth defects, and other health problems, due to living in close proximity to the poison Chevron left amidst their communities. And even that – the health impacts of Chevron's colossal crimes – is only one facet of the story. 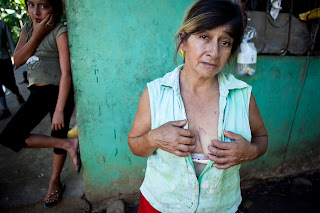