'Hero' Lawyer Pablo Fajardo on Taking on Chevron in Ecuador: "I Fight for Justice and for Life"

The Harvard International Law Journal recently published a thoughtful article by Pablo Fajardo, the acclaimed human rights activist and lead counsel for the 30,000 indigenous people and farmers of the Ecuadorian Amazon working to hold American oil giant Chevron (formerly Texaco) accountable for what he calls "serious violations against the environment and people of the region."

Although taking on this case was a great personal challenge for me, I was always aware of two aspects of it that would work in my favor. First of all, I live in the area affected by Chevron’s operations, and therefore I know personally the effects of the environmental and human rights abuses commited by the company in the Ecuadorian Amazon. Fully understanding the reality of the situation, I can speak with conviction: I know that I am speaking the truth. Furthermore, I am a human being who believes in God, life, justice and solidarity. Along with the indigenous peoples and farmers in the Amazon, my co-workers and I fight for justice and for life. 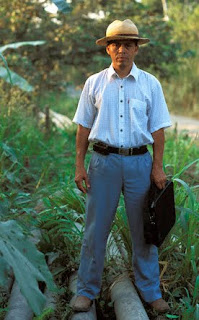 The article, entitled 'Corporate Accountability, Human Rights and Pursuing Justice in the Ecuadorian Amazon: Attorney Pablo Fajardo’s Perspective on Aguinda v. Chevron' appears in the Summer 2010 issue of the Harvard 'ILJ' which calls itself the "most-cited student-edited journal of international and comparative law."

The "reflective essay" as the editors refer to it, was authored by Pablo with the help of George Byrne, an intern with the Quito office of Amazon Watch.

The first paragraph of the 'introduction' lays out the background in dispassionate terms:

Texaco operations in Ecuador began in 1964 and continued until 1992. Until 1990, Texaco served as sole operator of a concession covering approximately 1,500 square miles of Ecuador’s Amazon rainforest. Texaco alone was responsible for planning, constructing and operating more than 350 well sites in a region that was, and still is, the ancestral home to numerous indigenous and farming communities. In violation of Ecuadorian laws and regulations, as well as standard operating practices being used in the United States at the time, Texaco engineered and oversaw a system responsible for what experts believe is the worst oil-related environmental disaster in the world.

Pablo goes on to outline some of the lessons he has learned throughout the seven years he has helped lead the efforts to demand Chevron clean up its oil contamination, and compensate the affected people for the harm it has caused.

One of my biggest disappointments has been the discovery of systematic corruption implemented by Chevron during the supposed remediation of the affected areas in the early 1990s. Corporate executives, Chevron lawyers and former officials of various Ecuadorian governments have been implicated in acts of corruption and deception linked to the fraudulent clean-up. They have sought to benefit economically, but in turn have caused or prolonged the worst oil related environmental disaster in history.

Another obstacle, much greater than I could have imagined, is the manipulation of scientific evidence by expert scientists to serve their own interests. In the same context, it is deplorable to see how Chevron has abused (and continues to abuse) the law in Ecuador and the United States of America to ensure that this grave and inhumane crime go unpunished.

Chevron has manipulated the international legal system from the moment the case was first filed in New York. For nine years Texaco vigorously argued under the doctrines of forum non conveniens and international comity that the case should be dismissed and, instead, be tried in Ecuador. To transfer the case to Ecuador, Texaco submitted fourteen separate expert affidavits from Ecuadorian lawyers and scholars (including their own Ecuadorian lawyers in the current trial), attesting to the fairness, independence and competency of the Ecuadorian judiciary. Chevron also promised, as a condition of the dismissal, to submit to jurisdiction in Ecuador and abide by any final judgment in the trial. Chevron was eventually successful in its plea and in 2002 the Southern District Federal Court of New York finally dismissed the case to be re-filed in their requested forum, Ecuador. Chevron praised the ruling, stating that it was “pleased with the ruling…[which] vindicate[d] Chevron’s long-standing position that the arguments we have made to the court: The appropriate forum for this litigation is Ecuador…” The communities, who had already waited a decade for redress, now had a limited time to re-file their claims in their home country.

Now, almost eight years later, Chevron is continuing this ‘forum shopping’ strategy in an attempt to delay the case even further.

Pablo explains how Chevron has filed an international arbitration claim, seeking to remove the case from the Ecuadorian courts that Chevron's lawyers previously praised.

But in a case like this, he notes, the arbitral process provides "no provision for the plaintiffs to appear, intervene, or even be notified of the private proceedings, those whose rights are most at risk are left without a voice, without access to information and without redress in the event of an adverse decision."

In conclusion, Pablo looks at the double standard that multinationals use depending on whether they are operating under the light of public scrutiny at home, or working far from the prying eyes of the press and public in faraway lands:

We need to understand that the environmental disaster caused by Texaco in Ecuador is not an Ecuadorian problem; it is a global issue. The double standard that companies employ in their operations demonstrates an immoral attitude of racism and discrimination.

As a sidebar on the article notes, "Pablo Fajardo was awarded the 2007 CNN World Heroes Award in the ‘Fighting for Justice’ category. In April 2008, Mr. Fajardo received further recognition when he was awarded the Goldman Environmental Prize, regarded by many as the “Green Nobel Prize”. 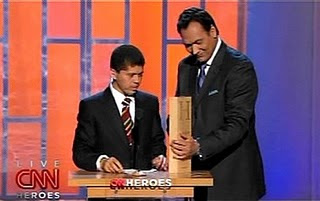 Nonetheless, in its contemptible campaign to evade accountability in Ecuador, Chevron continues to demonize this man.

A big part of the work of the Clean Up Ecuador Campaign at Amazon Watch is simply to highlight the noble efforts and proud voices of people like Pablo and those of the thousands of people he represents in Ecuador. Please read the entire article here, and share it with anyone you know who may be interested in the thoughts of this exceptional advocate for justice.