Yesterday, the plaintiffs taking on Chevron over its toxic contamination in Ecuador filed an explosive legal memo that shreds the company's latest deceptive attempts to manipulate U.S courts into helping it evade responsibility for massive environmental destruction and human suffering.

Filed yesterday with the U.S. District Court in New York, the must-read document is a 'Memorandum of Law' in opposition to a motion filed by Chevron last week to essentially serve a new round of subpoenas to filmmaker Joe Berlinger, director of the documentary Crude, and the crew that worked on the film.

The motion comes in the wake of Chevron's cabal of lawyers getting their hands on hundreds of hours of raw footage from the making of the acclaimed film Crude about Chevron's toxic legacy in Ecuador. Chevron alarmed journalists, filmmakers, free speech advocates, and others when it went to court to demand that acclaimed filmmaker Berlinger hand over all of the outtakes from the making of Crude. Chevron's subpoena of Berlinger is actually one of a rash of discovery motions the company is pursuing in this case under a federal statute allowing a party to apply to a U.S. court to obtain evidence for use in a legal proceeding outside the U.S. But Berlinger and his lawyers asserted that his footage was protected by the so-called journalist's privilege under the First Amendment and should be treated no differently than a reporter's notes.

Despite vigorous opposition from Berlinger and support from hundreds of prominent filmmakers, journalists, First Amendment advocates, and even a friend-of-the-court brief from 13 major media organizations including ABC, CBS, NBC, AP, Dow Jones, The Washington Post, The New York Times, etc., Chevron eventually prevailed in getting much of the footage they asked for. But not before Berlinger appealed the initial order and the appeals court carefully outlined the scope of the 'discovery' and made crystal clear how the footage could be used:

Material produced under this order shall be used by the petitioners solely for litigation, arbitration, or submission to official bodies, either local or international.

But Chevron ignored this order from the Second Circuit almost immediately. Upon receipt of the outtakes, Chevron filed its new motion, filled with ridiculously out-of-context excerpts from the footage that it claims showed misconduct on the part of the plaintiffs lawyers, and some sort of collusion with a court expert that it never really explains. Based on what it found in "preliminary" review of the footage already turned over, the motion supposedly appeals to the court for expanding its discovery beyond the 500 out of 600 hours of Crude outtakes that exist.

In response to the filing, Berlinger told Fortune Magazine:

"I am dismayed at the level of mischaracterizations in Chevron's Memorandum brief... The footage citations are being taken out of context and not being presented to the court in its entirety, creating numerous false impressions, precisely what we feared when we were first issued the original subpoena."

In fact, with its latest round of legal shenanigans, we see more clearly than ever the oil giant's cynical strategy of using absurd legal filings and abusing the courts to advance its dishonest public relations aims.

From the plaintiffs' legal memo (note the use of the term McMotion):

Now it is clear why Chevron hid the full outtakes from the Court and from Plaintiffs, and pressed to have this motion decided before Plaintiffs could even review the evidence. Chevron and its counsel have rushed to mislead the Court and the public with a McMotion based on sound-bites and highly-edited, de-contextualized snippets constituting less than 0.1% of the outtakes. It did so while concealing massive evidence in the outtakes of its won misconduct. And it did so in plain violation of a Second Circuit order.

Remember that order (above) from the Second Circuit Court of Appeals about "solely" using the material "for litigation, arbitration, or submission to official bodies"?

Well, according to the plaintiffs' filing:

No sooner did Chevron receive this footage than it rushed to file a procedurally-deficient Motion in support of its press strategy On August3, 2010, Chevron filed but did not serve the instant Motion. Rather than serve the respondents and interested parties, Chevron provided the Motion to its blogger, an individual named Carter Wood (who has admitted previously being paid by Chevron in connection to the case). Ex. 18 Chevron's blogger posted the blog at 7:47 p.m., included a link to the complaint, and quoted liberally from the outtakes (as transcribed by Chevron). Id. At 8:03 p.m., Chevron sent an international press release (by its Media Advisor Justin Higgs) announcing the present Motion, and linking to the blog, which linked to the Motion. At 9:03 p.m., still before serving the papers, Chevron posted on Twitter: "'Crude outtakes reveal Joe Berlinger followed trial lawyers' bidding to aid suit against #Chevron" to its Twitter.com page and linked to the blog."13

It was not until 10:07 p.m. when Chevron finally got around to serving its Motion on the actual litigants. Ex. 41.

In direct violation of the Second Circuit's order, Chevron then produced transcripts of the outtakes directly to the San Francisco Chronicle. This is made clear in an article that ran on August 5, 2010 in that newspaper. The article states: "[t]he Chronicle reviewed transcripts of the outtakes, supplied by Chevron."14 [emphasis is in the original]

In arguing for the District Court to deny Chevron's motion, the memo explains the real point of the company's motion to the court:

The memorandum goes on to review what was actually said in the seconds before and after the manipulatively-edited excerpts supplied to the court (and the media, and the public) in its motion. I encourage you to read it over to see how Chevron tries to deceive federal judge in a formal motion to the court.

Then the memo demolishes Chevron's absurd and oft-repeated claim that footage showing the plaintiffs' lawyers meeting with a engineer named Richard Cabrera is somehow proof of some kind of conspiracy to ruin Chevron.

The principal significance of the selected outtakes, according to Chevron, is that they reflect a meeting among Plaintiffs' counsel and Stratus at which Richard Cabrera is present [editor: Stratus is an environmental consulting firm assisting the plaintiffs in the case and Richard Cabrera is a court-appointed expert who reviewed evidence of contamination in the trial]. This is unremarkable. Chevron was free to meet with Cabrera, and has itself met with court experts outside the presence of Plaintiffs. In its massive submission, Chevron has cited no order, rule, regulation or law in Ecuador that would prohibit either Chevron or Plaintiffs from meeting "ex parte" with either Mr. Cabrera or any other court expert.

The memo continues, and turns Chevron's accusation on its head:

Notwithstanding Chevron's hyperbolic claims of fraud, collusion, and the like, the Ecuadorian court – which is the only court with knowledge of Ecuadorian law, procedure, and this case, and the only court in a position to rule on those issues – has given no indication that such contacts were or are improper. In response to this filing, the Lago Agrio court did not chastise the Plaintiffs. Nor did it suggest in any way, that under the law of Ecuador – the forum, after all, that Chevron chose, Exs. 23-31 – Plaintiffs committed any impropriety whatsoever. Is Chevron actually suggesting that so-called ex parte contact with court experts was prohibited or improper in the Lago Agrio case? It would be an interesting assertion, because if that is the case, Chevron will have much to answer for in Lago Agrio.

The plaintiffs' 24-page memo is predictably filled with legalese, and references to Exhibits and Declarations and such. But you don't need a law degree to understand this fascinating dissection of Chevron's legal-slash-media strategy.

But the challenge amidst all of this legal drama is to remember that there real lives at stake.

I just returned from the Ecuadorean Amazon where I saw with my own eyes the oil contamination that Chevron claims to have cleaned up. Where I smelled the oily sludge that lines the streams where Chevron dumped untreated toxic wastewater for years and years. Where I interviewed former Chevron/Texaco oil contractors who told me of their regret at being part of the company's destructive practices. And, finally, where I spoke with countless people who told me with tears in their eyes of miscarriages, birth defects, and cancer diagnoses, and Chevron's devastation of their environment, economy, and culture. 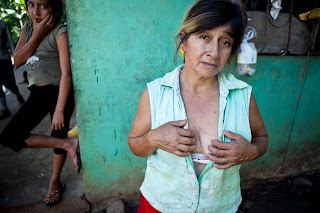 In a legal battle over its fundamental responsibility for poisoning communities throughout the Ecuadorean Amazon, Chevron knows it will lose. The evidence is littered throughout the rainforest. It bubbles to the surface, and floats on streams, and manifests itself in the throat cancer of an old woman waiting to see the nurse at the health clinic in San Carlos. And so Chevron tries to change the subject.

But in the end, despite all its legal acrobatics and PR spin, the company will be held accountable. It's only a matter of whether it takes a few more months or another twenty years. After decades of fighting for justice and clean up of their lands, the people of the Ecuadorean Amazon have waited far too long already.