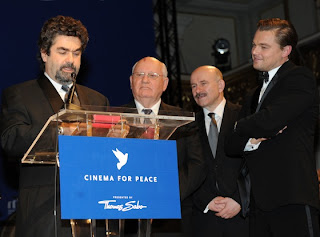 According to the Cinema for Peace Mission Statement, its aim is "to promote peace and international understanding through the medium of film." A story on online film news site Indiewire notes that Crude "may have been passed up in the latest rounds of Awards Season, but director Joe Berlinger received a high level round of recognition Monday night in the German capital." As Indiewire explains, "CRUDE profiles the case by tens of thousands of Ecuadorans against Chevron over contamination of the Ecuadorean Amazon." Congratulations to Joe and everyone else who worked on CRUDE!

Did you miss this award-winning film in theaters?

That's okay – Amazon Watch is teaming up with our allies at Rainforest Action Network to promote the upcoming DVD release, with house party-style screening events across the U.S.! We're encouraging our supporters to help organize hundreds of CRUDE screening parties across the U.S. in late March so please sign up to host a screening! We'll provide a free DVD of CRUDE and resources to help your event be easy, fun, and successful.

Born and raised in Baltimore, Han Shan is a human rights and environmental justice campaigner living in New York City. He is an organizer with the Clean Up Ecuador campaign for Amazon Watch.