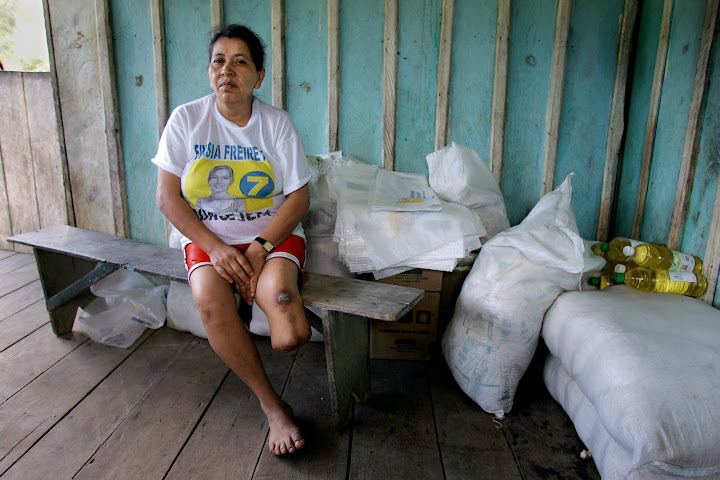 The Chevron Pit is featuring the first of many personal stories about how the oil contamination left behind by Texaco has impacted the people living near the oil company's former oil sites. Chevron purchased Texaco in 2001.

Their first story is about Modesta Briones, who passed away not long after she and her husband, Segundo Salinas, gave an interview to author Lou Dematteis for his book Crude Reflections (which includes many profound interviews as well as amazing photos and is available here).

Modesta Briones: It started with a little sore on my toe, which grew a bit larger. The water near my house, where I washed clothes, was full of crude and the sore grew bigger, as if the flesh were rotting. It didn't hurt, but I couldn't stand its stink. I had a fever and chills.

Segundo Salinas: In Quito they said it was a cancerous tumor, and they had to amputate her leg, or the cancer would spread throughout her body and she could die.

Modesta Briones: When the doctor told me he was cutting off my leg, I was so sick that I thought I was going to die.

He amputated, and the doctor said I should return for a checkup, but I haven't gone back because I don't have the money.

I'm having a hard time getting used to living without my foot. I can't walk with crutches. My husband, daughter and son help me, but it's a hardship for them. Now, I no longer leave the house. Since the operation, I've only left my house once, to request an I.D. card. After losing my leg, I regret moving to the Amazon, but what can one do?

Segundo Salinas: We've lived here some 30 years. We moved here looking for a better future because there was unoccupied land for sale at a good price.

Texaco had already drilled five oil wells. In those days, the oil companies didn't respect any laws. Nor did they respect us. They would say, "This is government land and we've made a deal with the government. And it doesn't include you, so leave." They would arrive, decide they wanted to drill somewhere, and then drill. They brought in machines and crushed our crops.

There are three toxic waste pits near my house, so many animals died. When my horses and chickens fell in, I pulled them out, but they stopped eating and died.

Some of the oil wells here have flares that burn off gas. The smoke rises, and when the rains come, black rain with a rusty smell falls back to earth, contaminating the land and the water.