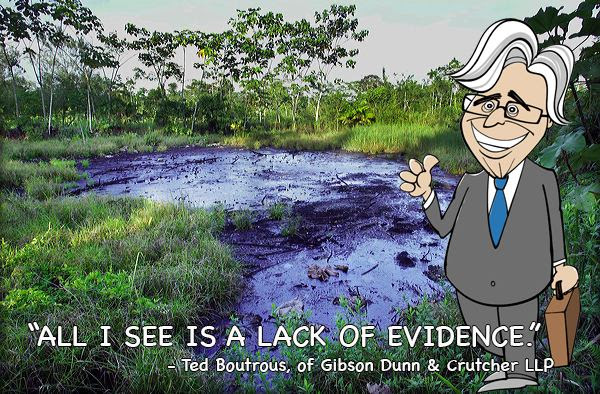 Ted Boutrous embarrassed himself in Huffington Post this week in an apparent attempt to "up the crazy" as the trial to seize Chevron's assets in Canada looms. It appears the "Big Lie" sickness of Donald Trump-ism continues to grow in America. The lawyer for Gibson Dunn, a firm known for its corporate attack dog efforts, has taken lying and slander to a new level. To Boutrous, giant fossil fuel corporations are the victims of legal attacks by environmental and human rights groups and the actual human rights violations or environmental destruction is either insignificant, or nonexistent in Ted's view. To top it off, Boutrous – defender of Chevron – worst global polluter ever – is lecturing that "the ends don't justify the means." It's not a coincidence that Chevron will find itself in court once again in a matter of weeks trying to justify the unjustifiable.

Boutrous has now tagged himself as the kind of lawyer who blames the rape victim for dressing the "wrong way". Or the kind of lawyer who blames the black man shot by police for being where he shouldn't have been and "looking like a threat." He has the audacity to blame the people Chevron deliberately poisoned by intentionally dumping billions of gallons of toxic waste in the Ecuadorian Amazon. Despite the fact that it is the largest oil-related disaster in history, which remains yet today in the form of almost 1,000 toxic waste pits, Boutrous claims there's "a lack of evidence."

To the families of the over 1,400 people who have already died of cancer in the Amazon – Boutrous denies your suffering. To the indigenous communities wiped out by Chevron's operations (and Texaco) over decades, Boutrous never believed in you in the first place. To any environmental or human rights advocates who denounced the environmental "crime of the century" Boutrous says you are criminals.

For the record, here are but a few of the incontrovertible facts to which Texaco has already confessed and to which any non-corrupted lawyer would concede:

In fact, Chevron videos taken in 2005 and leaked by a whistleblower prove even the few pits Texaco claimed to have cleaned were still toxic years after the alleged "remediation".

Texaco argued for a decade in US Federal Court in New York that Ecuador was the proper venue for the case and agreed that it would honor the decisions of the Ecuadorian court system. However, on the first day of the new trial in Ecuador, Texaco insisted that the case should not be heard in Ecuador either.

Chevron's key witness in its RICO case, disgraced ex-judge Alberto Guerra, received over $2 million from Chevron for his testimony, admitted to lying about alleged bribes from lawyers for the Ecuadorians, and admitted that he embellished his story to get Chevron to pay him more.

Forensic evidence obtained by analysts of the presiding judge's computer disprove any allegation of "ghost-writing" as the verdict was a document saved hundreds of times over a four month period and no external devices were attached (as Guerra claimed at one point).

In 2013, a US District Court found that Chevron had not shown that Amazon Watch had done anything wrong in relation to the Chevron litigation or that Amazon Watch had engaged in fraudulent conduct or furthered a conspiracy against Chevron. In an 11-page order, Judge Cousins quashed Chevron's attempts to open up Amazon Watch's files, and threatened sanctions against Gibson Dunn and Chevron if they reissued subpoenas unless they were "significantly narrower in scope to seek only highly relevant information and more carefully tailored to avoid infringing upon the organization's First Amendment rights."

None of this can be contested by Boutrous, no matter how much he may wish he could. And every single one of these facts are ones Chevron and Gibson Dunn hopes desperately that the public (and justices in Canada) will ignore or forget. Yet despite knowing them, and all those ethical guidelines Ted theoretically understands, he is willing to write that there's a "lack of evidence" against his client Chevron and the environmental NGOs asserting otherwise are criminals for doing so.

Like Chevron executives, who have spent billions to try to escape justice in Ecuador, Boutrous is impervious to shame. His firm has harassed people, threatened judges, bribed witnesses, falsified evidence (not the first, or second time), hidden information from the Ecuadorian court, and even admitted to opposing counsel in the U.S. that their motions were improper, yet filed them anyway. And it's within this context that Boutrous writes: "the ends don't justify the means."?!?

It's unclear which is a greater danger to our society, the ability for oil companies to intentionally and catastrophically pollute, or the willingness of large law firms like Gibson Dunn to cheat, lie and generally abuse the legal system in order to deny the existence of the continuing suffering of tens of thousands of people. Add to that the vilification and intimidation of anyone who dares to speak against them. Sounds like Donald Trump's ideal America to me.

Ted Boutrous is not an idiot, but he has demonstrated absolutely no moral compass whatsoever. In the fever to defend his client – a company that admitted to the deliberate pollution in the first place – he has gone completely off the deep end. And he has embarrassed himself in the process. That's probably why he (or his staff) have obsessively deleted every comment to his post on Huffington – a delicious irony from a "First Amendment lawyer."

The notion that anyone would accept his premise when Chevron has lost every legal contest apart from Kaplan's (which is still under appeal, and was just handed another major blow by a recent SCOTUS decision about the use of RICO in such circumstances) is frankly preposterous.

No, we can't afford to sue Ted and Gibson Dunn for their acts of libel and intimidation, and they know it. The system of justice here completely favors the Chevrons of our society. That's why they are infuriated that the people of Ecuador actually persevered. Despite all Chevron and Gibson Dunn did to prevent it, they couldn't stop the $9.5 billion judgement against them. They won't be able to stop the action to enforce that verdict in Canada to seize Chevron's assets there, but Ted Boutrous and his buddies intend to get much richer trying.

Ted's post is a sign that the Chevron attack dogs are foaming at the mouth the closer we get to a trial in Canada (it begins in September). Last year, when the Supreme Court of Canada sided unanimously with the Ecuadorians to allow them to sue to enforce their verdict, it sent shock waves through Chevron's board room. The phone calls to Gibson Dunn have probably been non-stop ever since.

Ted Boutrous is using Huffington Post to spread more lies that Chevron hopes will sow more doubt about this case. "Perhaps there is no evidence in Ecuador after all." That's what they hope journalists or justices in Canada will think. Perhaps global warming is a hoax, too. "I read on the internet," says Donald Trump. That is the era we live in.

Anyone can appreciate the irony when Ted Boutrous calls Trump out for his racist comments about a judge while he dismisses Ecuador's entire judicial system, local communities and indigenous peoples as either too corrupt or too "unsophisticated" to make a just ruling based on the overwhelming evidence in the Amazon. Trump doesn't appear embarrassed, but Ted certainly has been.