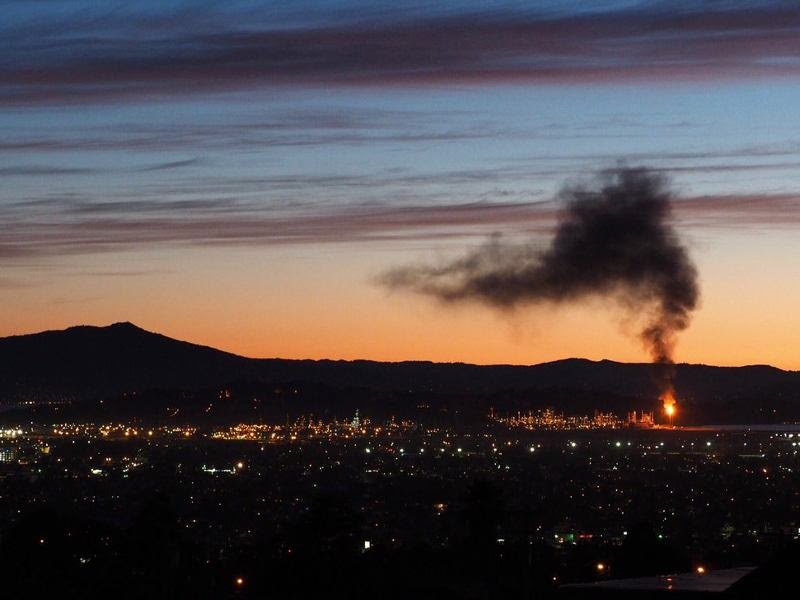 Reposted from Eye on the Amazon.

Chevron sending up massive flares in Richmond is not the only sign things are getting hot for the oil giant on the run from a $11 billion verdict.

On June 19th, Chevron's Richmond refinery erupted a torrent of flames and black smoke into the air and terrified local residents. The community remembers all too well when 15,000 people were sent to the hospital when that same refinery exploded in 2012. Unfortunately, since then the public hospital in Richmond has closed. They can't afford another explosion as the closest public emergency room services are now thirty to forty minutes away in Oakland.

But that's not the only thing "on fire" at Chevron lately. Similar to the company's claims that it needs massive flares to burn off excess gas, Chevron claims there's "nothing to see here" as it tries to sell off US $5 billion in assets in its Burnaby oil refinery in British Columbia. But the company's actions and track record tell a different story. Realizing it was going to lose in its legal battle and be forced to accept responsibility for deliberately dumping 18 billion gallons of toxic waste into the Ecuadorian Amazon, Chevron instead sold off all its assets and fled that country. It's been a corporate criminal on the run ever since, but the law is finally catching up with Chevron – in Canada.

In September, the Ecuadorian plaintiffs – bolstered by a unanimous decision in their favor by Canada's Supreme Court – will begin their trial to seize Chevron's Canadian assets to cover its US $11 billion debt to the affected communities in Ecuador.

Chevron currently holds approximately US $15 billion of assets in Canada, almost all of which is at risk due to this enforcement action. Chevron refuses to acknowledge its full liability to the SEC and to its shareholders, and this latest move may give a clue as to why. Unable to replicate its customary racist attacks against Ecuador's judiciary and legal system, Chevron has to dream up new methods in Canada.

The Ecuadorians have defeated Chevron in every single legal contest which has considered the evidence of their crimes in Ecuador (Chevron's singular victory – a retaliatory RICO SLAPP suit in the US – notoriously forbade any evidence of contamination in its proceedings and is still under appeal). The writing is on the wall in Canada, and Chevron is trying to slip out quietly and escape justice once again.

To make matters worse for the oil giant, a recent U.S. Supreme Court decision on the use of RICO may preemptively doom its defense before the Second Circuit Court of Appeals in New York. As respected appellate attorney Deepak Gupta wrote, the Supreme Court decision "further limits private RICO actions by requiring proof of a quantifiable, redressable and domestic injury – something Chevron has steadfastly refuse to identify." The decision also made clear that the RICO statute could not be used to attack a final judgment from a foreign court, as Chevron has tried to do in the Ecuador case. Aaron Page, a U.S. lawyer for the Ecuadorians called it a "nail in the coffin" of Chevron's RICO case. He added, "Now, the Supreme Court has ruled you can't bring a RICO case, even a legitimate one, based on harm that took place abroad. This is another example of why Chevron's RICO case should have been thrown out on day one."

Bottom line on these developments: no matter how desperate it gets, Chevron can't hide its actions in Canada or its pollution in Ecuador or Richmond.
Posted: Monday, June 27, 2016