Chevron CEO To His Board: Our Ecuador Problem Just Won’t Go Away 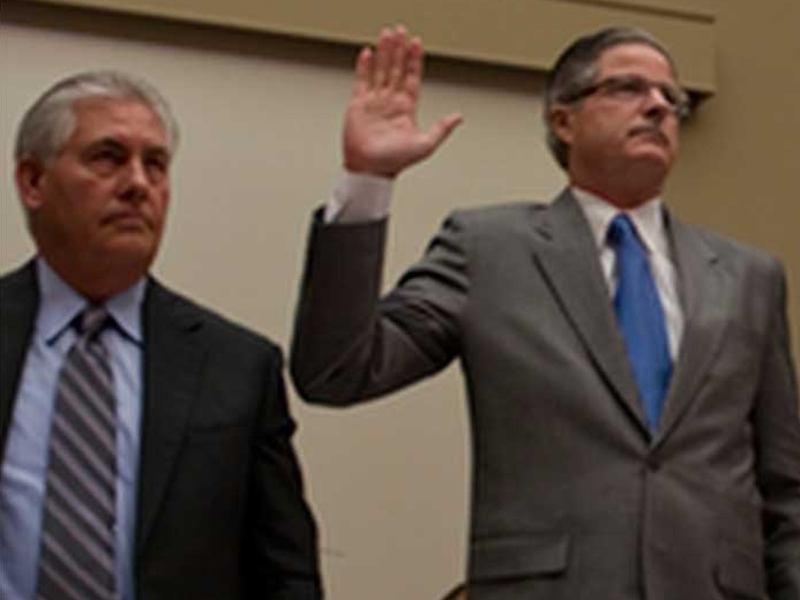 [Of course, we don't have access to Chevron's internal communications. But if we did, this "memo" is what we imagine we might see. It's hard to peek into the mind of someone who is responsible for massive environmental destruction and human rights violations, but based on John Watson's actions as Chevron CEO this should be about right.]

Dear Chevron Board of Directors and Senior Management:

This Wednesday will mark my sixth Annual Shareholder Meeting as your Chair and Chief Executive Officer. I want to thank you for the complete trust and lack of oversight you have given to me and our legal team headed up by Hew Pate in handling the ongoing Ecuador matter. Regretfully, I must inform you that we will once again have to deal with representatives of the indigenous and farmer communities of the Ecuadorian Amazon and their many misguided allies at the meeting on Wednesday.

As you know, our primary strategy since Chevron merged with Texaco (thanks in great part to my work as chief architect of the merger) is to spare no expense in dragging out legal proceedings as long as possible (and given our hefty bank accounts, that could last longer than all the remaining oil reserves, am I right?). We will continue that approach in Canada and anywhere else, or as our PR team so aptly put it: "until hell freezes over."

However, there are a number of developments since the meeting last year. I have anticipated some of your questions and will endeavor to respond to them below:

Yes, the Canadian Supreme Court sided unanimously with the Ecuadorians to allow their enforcement proceeding to begin there this Fall. Not to worry, we have hired multiple firms in Canada and we fully expect to be able to drag that trial out for many more years in hopes our opponents finally run out of funding to continue the fight.

No, we have not reported this $11 billion liability to the SEC for this case. Of course, we will stand by our claims that Chevron-Canada can never be held liable for Chevron's actions. (Don't worry, we still get to list all the assets of Chevron-Canada as ours in our annual report). Sure, someone at the SEC or Department of Justice might figure out that we're trying to have it both ways. But I'm pretty sure our bylaws allow for having our cake and eating it too.

Yes, there's risk we will have to 'clean up' and ‘pay up' as the activists say. And this whole Canada thing could affect our existing operations and new upstream development plans. But, no matter what happens, I look forward to receiving a generous bonus and I promise to give you a few weeks notice before I "float away on my golden parachute."

Yes, we are still awaiting the decision of the Second Circuit of Appeals on that RICO case that Judge Kaplan so graciously advised us to file. It is true that if we win it doesn't prevent the communities from continuing their enforcement actions, but we're happy to have paid Gibson Dunn so much money that the firm opened a new international litigation spin-off to help companies like us get off the hook for paying for things like environmental remediation and rights abuses.

No, even though Judge Wesley suggested it, we will not be forced to try the original case all over again in front of the Second Circuit in New York. Ted Olson has assured me that they can't actually force us do that. Quite a relief, what with the pollution, cancers, and stuff.

No, our case is not dead just because our star witness Judge Alberto Guerra admitted to lying on the stand and forensic evidence shows that the Ecuador judgment was indeed written by the presiding judge. I mean, sure, it's not great, but to quote my buddy Don Rumsfeld, ‘you go to war with the army you have, not the army you might want'. Probably shouldn't have given him a backpack full of cash, though. I'm going to add a note to self here that we've got to be more creative when bribing people.

Yes, in the "bribery" column of your report you will see that we will continue to pay the housing costs and "stipend" for Judge Guerra for at least another year. If we failed to continue this support it might look like we were only paying him to testify in our favor, so his admission of lying under oath in the RICO case actually demonstrates that the $2 million he has received from Chevron can in no way be seen as a bribe. Good news! And of course, we don't want him to turn on us and further, so consider it well invested hush money.

Yes, it is true that our legal team verified the leaked inspection videos from 2005 released by Amazon Watch. (No bonuses for those involved!) Those videos show our technicians finding toxic waste at sites we defended as clean in the Ecuadorian trial. Fortunately, we have successfully kept them off mainstream media in the US with some well written letters from our lawyers and the protection of Judge Kaplan's verdict. As such, they have only been viewed a few million times on the internet.

If you are confronted by any Ecuadorian "natives" at the meeting, I recommend you take my posture of simply dismissing them as naive people who have been manipulated by "greedy New York lawyers". If they have water with them, DO NOT DRINK IT.

Once again, just as we expect this divestment movement to fade away, we estimate that eventually the Ecuadorians and their lawyers will run out of support and be forced to abandon their case. I promise you that day is coming... they can't live forever after all, especially given that water they have to drink.

Let's just get through this meeting on Wednesday and engage as little as possible with people from Ecuador, Richmond, Canada, Nigeria, Argentina, Brazil, Australia, Romania... and anywhere else our operations generate "protest".

Remember what I said last year, "the path to prosperity is through fossil fuels." For most of the world it may be an oil soaked path through a desert world, but just look at how good it has been to all of us!

John Watson
Chief Executive Officer AND Chairman of the Board
(It's good to be your own boss!)