Amazon Watch and our supporters will not be bullied! 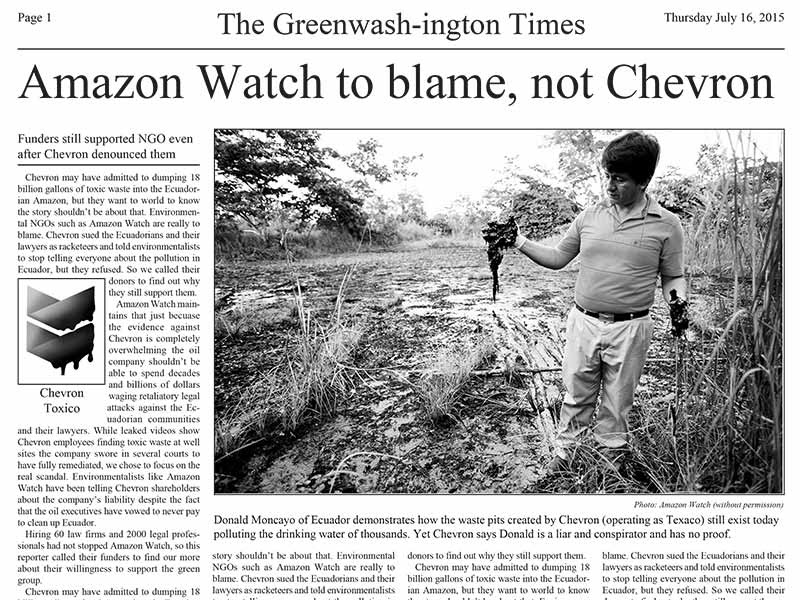 As part of an ongoing effort to blur the truth, The Washington Times just published a "hit piece" against Amazon Watch, which has long supported the Ecuadorian communities that were devastated by decades of Chevron's reckless actions for which it has been found guilty in a landmark environmental lawsuit. Biased and misleading, the article is nothing more than another piece of Chevron's ongoing strategy to do anything other than deal with the consequences of its actions in Ecuador and the subsequent toll on the Amazon rainforest and its inhabitants.

When it's impossible to hide a crime, as with Chevron's environmental devastation in Ecuador, corporate criminals have a history of changing the story to vilify the victims and their allies instead of facing the consequences. For Chevron's army of lawyers and multiple PR teams – and more money than some nations – there's no lie too big and no scheme too outlandish.

We first learned of this latest attack a couple months ago when a major contributing foundation received a voicemail from a Washington Times "reporter" asking false and misleading questions. Shortly thereafter, we heard that additional foundations also received biased, pro-Chevron emails from the same "reporter." In her correspondence, Kellan Howell repeatedly omitted the fact that Amazon Watch had successfully defeated all of Chevron's allegations of wrongdoing in federal court. And that's the difference between an investigation and a smear campaign: journalists investigate truth, smear artists propagate lies. Yet, much to Chevron's chagrin, our donors' steadfast support and refusal to be intimidated comes across clearly in the article despite the author's attempts to cast us in a negative light.

Even after it was brought to her attention multiple times, including by our lawyer, Ms. Howell's article completely omits the fact that a US District Court found – rejecting Chevron's argument that Amazon Watch had done anything wrong – that "there is nothing to suggest that Amazon Watch's campaigns and speech were more than mere advocacy and were likely to incite or produce imminent lawless action," and that "[a]ll that Chevron has shown this Court is that Amazon Watch has been very critical of Chevron's operations in Ecuador."

Of course The Washington Times failed to include that vital information because it directly refutes Chevron spokesman Morgan Crinklaw's slanderous statement that Amazon Watch was "paid to promote knowingly false and misleading information about the company to the media, the U.S. Securities and Exchange Commission and government officials…"

In another glaring example of biased reporting The Washington Times deliberately omits the fact that Russell – who issued the $6 billion damage estimate – "left the LAP [plaintiffs'] team . . . because, among other reasons, the LAP team owed him money and refused to pay it." Additionally, Russell admitted that after the consultant underwent a falling out with Donziger, he turned around and offered his services to Chevron. Of course, after Russell left the team the final damage estimates were much higher than $6 billion.

Below is the response Amazon Watch sent to The Washington Times when they reached out to us for comment several weeks after first contacting our donors.

Amazon Watch is proud to accompany the Ecuadorian communities affected by Chevron's deliberate contamination in the Amazon for over a decade. Those communities achieved one of the most important environmental victories in history by winning a $9.5 billion judgement against Chevron for dumping of over 18 billion gallons of toxic waste into the Ecuadorian Amazon. That judgment was affirmed by the Supreme Court of Ecuador in a 222-page decision that meticulously documents Chevron's environmental crimes, fraud, bribery, and subterfuge during the eight-year long trial. During the appeals process, Chevron's bogus claims of fraud were reviewed and dismissed by the higher court in Ecuador.

Chevron's retaliatory RICO suit against Steven Donziger and the Ecuadorian communities is nothing more than an attempt to distract the international community from its actions in Ecuador and attack its critics. We do not consider Judge Kaplan to be in any way qualified to rule on Ecuadorian law much less the specifics of this case when he has no knowledge of the Ecuadorian legal system, does not speak Spanish and never even visited the affected areas.

The Kaplan decision is under appeal and during a recent hearing on April 20th of this year, one of the appellate judges grilled Chevron's lawyers as to why they argued for years to move the trial to Ecuador if they claim now they could never have received a fair hearing there. The truth is that Chevron has never been interested justice in this case; rather its strategy is to litigate in perpetuity and fight until its victims literally die out waiting for justice.

Judge Kaplan demonstrated strong bias against the Ecuadorians, refused to allow a jury, and forbade any evidence of the actual contamination in his courtroom. Chevron's entire case rests upon testimony of a corrupt ex-judge from Ecuador who was paid over $2 million by Chevron to offer a story which is not supported by the facts. In fact, recent evidence provided by the government of Ecuador proves the author of the Ecuadorian judgment was the presiding judge Zambrano and any claims of ghostwriting are false.

Amazon Watch has never committed any unethical or illegal activity, nor has any court determined that we have. Chevron attempted to intimidate and harass us simply because we have been one of their strongest critics and have organized shareholders with billions of dollars of assets under management to pressure the company to do the right thing and clean up Ecuador. Those efforts and this article are part of a premeditated strategy to prevent corporate accountability advocates from holding corporations like Chevron to account.

During Amazon Watch's 19-year history, we have been supported by donations from many thousands of individuals and dozens of institutional funders. Our supporters are proud of and share in our successes to hold Chevron to account and continue to demonstrate that support to this day. Likewise, Amazon Watch has received support from The Sierra Club, Amnesty International, Greenpeace and dozens of other human rights and environmental organizations who have denounced Chevron's legal attacks and infringements upon our free speech and threats to open society.

We are disappointed that The Washington Times would further Chevron's retaliatory acts which lack credibility while it fails to cover the truly important story about Chevron's misdeeds in Ecuador. For example, recent Chevron whistleblower videos show the company finding toxic waste in locations it swore to have fully remediated. This blows the lid off Chevron's already weak defense in Ecuador and proves the company knew people in Ecuador would continue to get sick and die due to its contamination – yet they did nothing to help them.

Furthermore, we object to emails sent by The Washington Times to our funders containing false and misleading information about our activities on this campaign. The Washington Times should strive to accurately report on these issues and its mischaracterizations do an immense disservice to the truth.