Bringing Dishonor Upon an Honorary Award 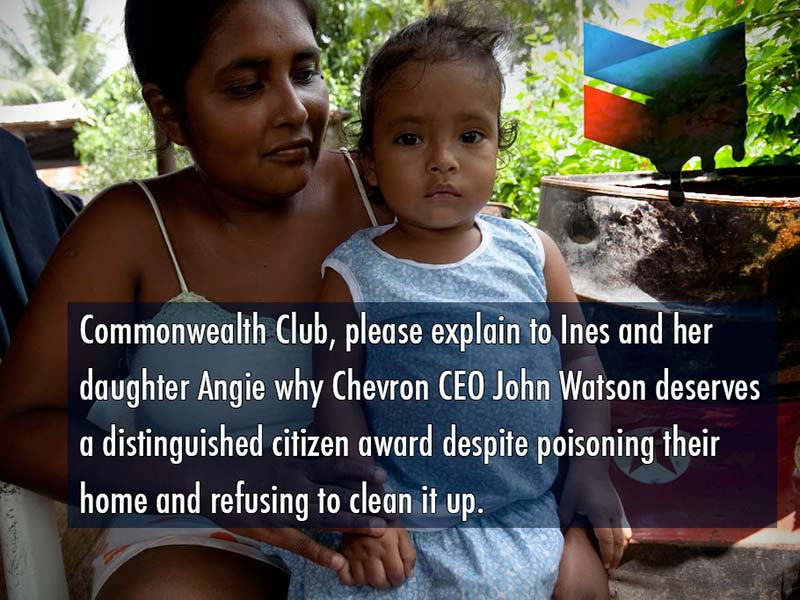 We just found out that the Commonwealth Club of California – the "nation's oldest and largest public affairs forum" – plans to honor Chevron CEO John Watson as a "distinguished global citizen" who has "given back" to the global community. They're actually going to honor Watson's ability to abuse his power, wealth and corporate connections to evade accountability for the wide range of environmental and human rights crimes he has overseen as head of Chevron since 2010? WHAT?!


There are a myriad of reasons why presenting such an award to Watson is outrageous. Massive pollution and health crises in Ecuador, death and destruction in Nigeria, lying to shareholders, abuse of the justice system, trampling free speech in the U.S., dumping millions into local elections to undermine democracy...the list of Chevron's violations goes on and on. Watson has either overseen or has taken a personal role in advancing strategies that attack Chevron's critics and has gone to extraordinary lengths to avoid accepting responsibility for Chevron's well documented actions of harming both people and the planet. It took less than a day to find almost 40 human rights and environmental organizations ready and willing to denounce this decision. If we had taken a week it would easily have been well over 100.


How is it then that none of this leaves a sour taste in the mouths of the Board of Governors at the Commonwealth Club?


Yes, this is all clearly a way for the Commonwealth Club to have a very successful fundraising gala. You present a symbolic award to someone like Watson and all his friends and colleagues come to dine and celebrate, donating thousands to the Club and paying exorbitant amounts for dinner and drinks at the Ritz Carlton. But just how far does someone need to go before it becomes in bad taste to "honor" them, despite how much money it may bring in? Would Bill Cosby be invited to the dinner alongside Jennifer Siebel Newsom as she talks about her work and film project on behalf of women and girls? I think not.


Yet Watson and Chevron's acts to criminalize free speech and attack their critics were recently condemned by the Sierra Club, Greenpeace, Amnesty International and a host of other respected groups. Chevron famously lost in its effort to buy the elections in Richmond, hoping to completely undermine the democratic process. Why? Because their new puppets in Richmond would then drop the city’s lawsuit for the deadly refinery fire of 2012.


When Watson took over Chevron in 2010 his company's handling of its Ecuador disaster took a very different and distinctly aggressive tone. Watson had been one of the architects of Chevron's merger with Texaco years before. He was there when Amazon Watch warned Chevron not to proceed because of the enormous liability in Ecuador. He knew that Texaco admitted to deliberately dumping billions of gallons of toxic waste into the pristine inhabited rainforest. He knew Texaco documents were uncovered proving the company's policy of hiding leaks and not reporting spills during its operations. Apparently, just as the Texaco executives decided that it was worth the human and environmental toll to save $3 per barrel by dumping the waste for decades instead of lining their open toxic waste pits, Watson decided the merger with Texaco was worth the cost. He literally agreed to own Texaco's mess.


When Watson took over from David O'Reilly in 2010, he had a choice. He could have ushered in a new era for the company. He could have apologized to the people of Ecuador. He could have negotiated a settlement and agreed to clean up the Amazon wasteland his company had created. True – to do so would have cost a tremendous amount of money. But in addition to being the right thing to do, and stemming the wave of deaths from cancer, it would have also been fiscally responsible. And it would have earned Watson a legitimate reason to be recognized by a group like the Commonwealth Club.


For in the end, Chevron has spent over a billion dollars already just fighting to avoid its responsibility. Lawyers have built careers (and billed more than the affected communities in Ecuador make in a lifetime) providing legal defense for Chevron. When all is said and done, and Chevron finally pays for the clean-up, when it realizes that the resolve of the affected communities and their many global allies in supporters is stronger, then it will have paid twice over for its acts in Ecuador. Thousands more will have died from cancer, however. They are suffering and dying at this very moment.


Will Watson or anyone at the Commonwealth Club gala give a moment's thought to them on April 2nd?


We could all shrug our shoulders and write this whole event off as just more of the rich patting themselves on the back and move on. But there is a real danger here. The danger is that this isn't just a pro-oil company lobby group celebrating Watson's acts to thwart renewable energy programs. This is an institution founded for debate and discussion on the issues of the day granting legitimacy to a known corporate criminal who is free from accountability only because he and his company are rich enough to hire 60 law firms and over 2000 legal professionals to drag on the legal saga for ages in hopes that the affected communities will literally die out and their supporters will exhaust the resources to assist them any more. That act must be protested. The standard that allows Watson to stand next to people acknowledged for actually trying to better the world must always be condemned. That is why we register our outrage. It is on behalf of those sick and dying in Richmond, Nigeria, Ecuador and elsewhere, who John Watson could have assisted – and didn't.


It probably won't be until the day Chevron finally pays the Ecuadorian judgment when the reckoning comes for Watson. Perhaps only when the bill at long last arrives, when Chevron's assets are seized and Watson can't hide that he's cost shareholders billions of wasted dollars, that organizations like the Commonwealth Club will keep the name of Watson off the list. At that point it would just be in bad taste.