Hall of SHAME? We Have a Winner! 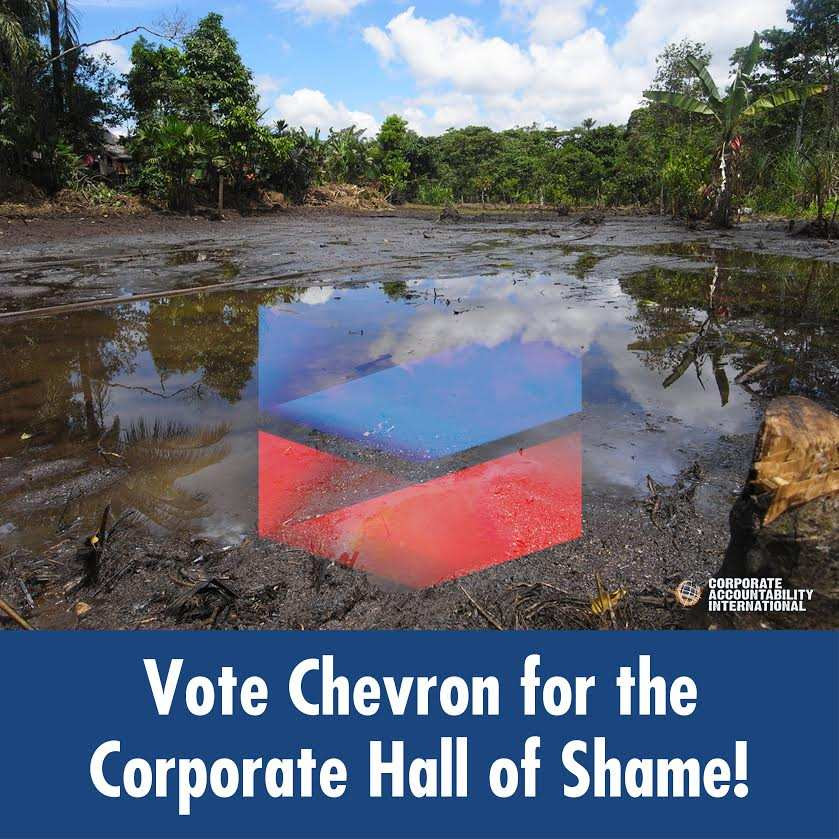 Please vote for Chevron in the 2014 Corporate Hall of Shame today!

There are many corporations worthy of being condemned for their actions that harm people and the planet, but none more deserving than Chevron. This company has reveled in its role as corporate criminal on the run from a $9.5 billion verdict against it in Ecuador for the deliberate dumping of billions of gallons of toxic wastewater into the rainforest. Chevron brazenly flaunts the fact that it will not be held to account by any court anywhere and will never stop fighting the very people who continue to suffer from its willful contamination.


As if that weren't enough to merit the shameful prize, Chevron's reputation goes well beyond the Ecuador disaster. Earlier this year simultaneous protests of Chevron's environmental and human rights crimes were held in 20 countries on five continents. Affected communities in Ecuador, Nigeria, Argentina, Romania and California called for solidarity and the global community has condemned Chevron.


Although Chevron was found liable after the most litigated case in the history of Ecuador, it refuses to pay. What's worse, instead the company has attacked the nation of Ecuador, its judicial system, and the very people it systematically poisoned. These baseless fraud accusations are only given any credence in the media because the company has spent hundreds of millions of dollars, not to clean up, but to hire lawyers and PR firms advocating that Chevron is "the victim." Really?!?


Most concerning is the fact that Chevron's method of dirty tricks and legal attacks is being lauded by corporate advocates seeking to silence critics speaking out about corporate abuse. This is precisely why Chevron's methods have been condemned by Amnesty International, The Sierra Club, Greenpeace, Avaaz, Rainforest Action Network, Corporate Accountability International and some 35 other human rights and environmental organizations. Over 250,000 people have petitioned the U.S. Senate to investigate Chevron's manipulation and abuse of the legal system that violates the First Amendment.


Chevron's legal attacks pose a severe threat to the rights to expression, association, political participation, and access to courts guaranteed by the First Amendment. If the corporation is permitted to use these methods against public interest groups and activists who engage in First Amendment-protected activities to seek to hold private parties accountable, democracy itself is threatened.


Chevron's actions pose THE biggest attack on corporate accountability efforts to date. That's why – more than any other corporation – Chevron deserves this award. Please vote for Chevron in the 2014 Corporate Hall of Shame today.