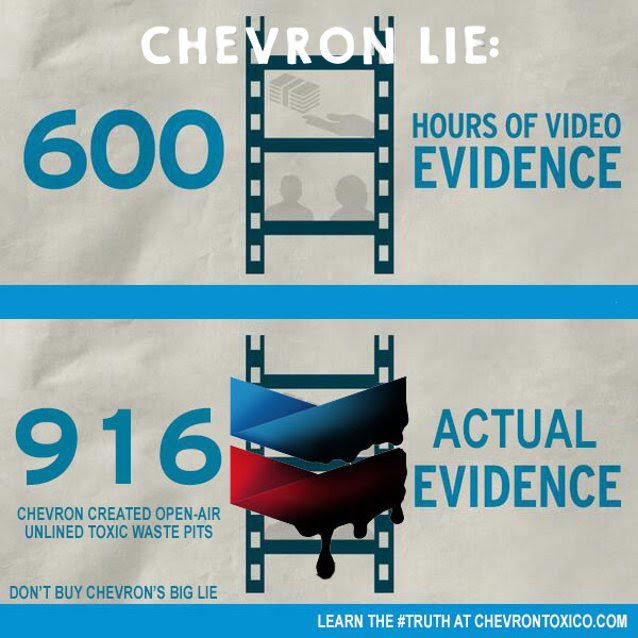 Reposted from Eye on the Amazon (more images available there)


Global Warming is a Myth


The NSA is Not Really Spying on Americans


Chevron Has Been Exonerated from Ecuador Disaster


These are all headlines you often see in U.S. media that are obviously false. Yet why do they even get traction? The answer, of course, is that they serve powerful interests who promote them incessantly in whatever space they can find or that money can buy in the mediasphere. But that doesn't mean that people buy into them, or that they should.


Chevron's "Big Lie" about its contamination in Ecuador is a prime example. Not only has Chevron been found guilty in a court of law of dumping billions of gallons of toxic waste into the Amazon rainforest, but the decision has been confirmed unanimously by two different appellate courts in Ecuador where Chevron fought to have the trial held. Dozens of independent journalists have also confirmed the existence of Chevron's massive pollution, most recently in this article published just last week.


Chevron likes to point to a recent court decision by a federal judge in New York who "determined" after a one-sided trial with no jury that the trial in Ecuador was marred by fraud. The judge based his decision on the clearly corrupt testimony of an Ecuadorian man to whom Chevron paid well over $350,000, or 20 times his annual salary. Yes, it is offensive to our sensibilities as U.S. citizens to think that such a sting would fly in a U.S. courtroom. But think again about the current state of our democracy, the massive and growing corporate power, and the daily exposure of injustices that read like the script of the next Jason Bourne movie. And then read on – Hollywood's best couldn't make this stuff up.


So despite sensational headlines, Chevron still owes $9.5 billion to the communities in Ecuador and no court has found otherwise. Indeed, Chevron has openly admitted its predecessor company Texaco deliberately dumped billions of gallons of oil waste into the rivers and streams relied on by indigenous groups and entire communities for sustenance. The company never denied that it engineered and exclusively operated for decades an oil extraction system that was designed to pollute. Chevron's contamination in Ecuador was not an accident; it was a corporate decision designed to sacrifice human health and well being in the name of greater profits.


Eventually, Chevron CEO John Watson is going to have to answer to his shareholders as to why he spent millions upon millions of their money on a legal strategy that offers no actual legal remedy for the company. What he actually spent their money on was a talking point – and a false one at that.


As is widely known, Chevron bought itself a disaster unlike any other when it merged with Texaco in 2001. For years, it has tried everything, literally sparing no expense, to wash off the filth of its ADMISSION of deliberately poisoning the Ecuadorian Amazon over decades. To that effort it tried pushing its case in any forum it could that would give a favorable verdict – including now more than 30 federal courts throughout the U.S. When you have 60 law firms and 2,000 legal personnel and are spending over a billion dollars to fight, that opens up a lot of options. But Chevron has fundamentally failed. In fact, "18 different U.S. federal trial courts and all four federal appellate courts have either rejected Chevron's claims outright, or refused to adopt them. The U.S. Supreme Court also denied a Chevron petition to review a decision denying it the right to arbitrate the issue of liability."


Yet Chevron finally found two venues working for it – Kaplan's court and an International Investor Tribunal of the Hague (to learn more about how anti-democratic and biases that venue is, read this release from Public Citizen). So, in crude yet sadly accurate terms, Chevron threw all the sh*t it could at the wall to see what would stick. That's how it found Judge Kaplan. Kaplan actually invited Chevron to file the RICO case against the Ecuadorians and their counsel, and then assigned the case to himself rather than go through the random selection process as is the normal custom in the federal judiciary.


The whole process stunk from the beginning.


Witnessing the trial myself last fall and consulting with lawyers in the field, I can attest that things went on in Kaplan's courtroom that raise disturbing questions around his own ethics and the U.S. judiciary. The list is long but includes: allowing Chevron to pay its witnesses in violation of rules barring the same; degrading treatment of a foreign judge from Ecuador who testified that he wrote the judgment; threats and outright hostility to Ecuadorian witnesses and permitting absurd lines of questioning in open court while acknowledging their inappropriateness at sidebar, among many other problems. The Second Circuit Court of Appeals (which oversees Kaplan) will most likely strike down most – if not all – of Kaplan's ruling. Click here to read the Ecuadorian legal team's analysis of why Kaplan's decision is "fatally flawed" and will likely be overturned on appeal and backfire against Chevron abroad. In the meantime, Kaplan's judgment still carries no legal authority outside the U.S. and it decidedly will not stop the seizure of Chevron assets.


So then, why did Chevron pay through the nose to get the verdict?


Setting a Precedent: A Clear and Present Danger


Let's be clear: Chevron's main "victory" (if you want to call it that) is not in the actual verdict – since it has no legal impact on enforcement – but the SALE of the message that it brings. And that was its primary goal in the first place. Chevron knows that its case looks pathetic the moment anyone actually looks beyond the surface. They're counting on most people NOT to look. And they are counting on most members of the U.S. media to swallow the story as it is fed to them by Chevron's deep-pocketed public relations team. Some journalists have paid passing mention to the glaring injustices of Kaplan's court, like the fact that Guerra – the key witness upon which the fraud claims lie – completely lacks credibility. However, almost all continue to promote false Chevron talking points. And everyone knows the famous expression about repeating the same lie over and over.


Ironically, the grave danger here is not to the Ecuadorians seeking justice. In fact, they're not dissuaded in the least by a U.S. judge acting in an overtly racist manner, with the gall to pass judgment on their legal system without knowing the first thing about it nor even trying to educate himself. No, the real danger is the precedent this sets for our work to hold Chevron and other U.S. corporations accountable. Kaplan's ruling, if allowed to stand, tries to criminalize the critical First Amendment activity of watchdog groups like ours. It would allow any corporation to bring SLAPP lawsuits against human rights and environmental activists and their lawyers and force them to spend millions of dollars in time and legal costs defending themselves. Faced with the risk of turning over all their information to their very targets of their campaigns or possibly being fined if they refuse to comply with sweeping subpoenas, many groups will be cowed into submission before their cases even get to court.


If our government – spurned on by pressure from civil society – does not step in and prevent this heinous attack on justice and the First Amendment, then we might as well start waving the white flag in the face of growing corporate power in America. That's why the Sierra Club, Greenpeace USA and 40 other human rights and environmental NGOs (most of which have never even been involved in this campaign) condemned Chevron's actions and well over 100,000 people have sent messages to the U.S. Senate demanding that they investigate this company that has gone off the rails.


We cannot permit Chevron's Big Lie that it is off the hook in Ecuador to take hold and grow. It threatens every action we take to challenge corporate crimes at home and abroad. The first step to fighting back is not permitting the "Big Lie" to permeate our body politic any further. Chevron can spend untold millions touting this verdict but DO NOT BUY IT – and don't let anyone else buy it either.