We Beat Chevron, but the Fight for Real Justice Continues 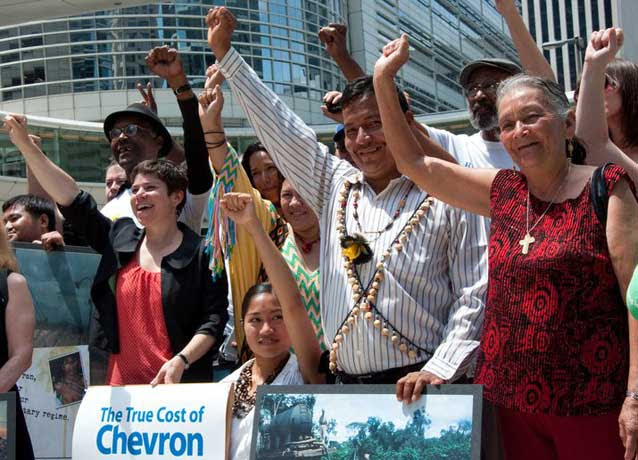 At one point or another every social justice activist wakes up wondering if we stand a chance against the massive forces acting against us. This week, my faith in justice was given a boost when Amazon Watch won a major victory in the face of Chevron's massive legal efforts against us. In U.S. Federal Court on Wednesday, Chevron's efforts to significantly disrupt our work and threaten our ability to campaign against their reprehensible actions in Ecuador were entirely quashed.


Several months ago I wrote about being served a subpoena on my front doorstep by one of Chevron's 60 law firms – Gibson Dunn & Crutcher. Chevron has falsely accused Amazon Watch of participating in a "massive global conspiracy" against the company because we have stood with the communities fighting for justice in Ecuador for almost two decades. As part of their scorched earth legal strategy, Chevron is attacking virtually anyone and everyone who has spoken out about Chevron's misdeeds in Ecuador. As this post by our heroic legal support team at EarthRights International explains, "Chevron has also sought discovery from journalists, activists, lawyers, and even from its own shareholders."


Yet, even after obtaining hundreds of thousands of documents from other parties and hundred of hours of depositions, they had not a shred of evidence that Amazon Watch has done anything wrong. Of course not. Because we haven't.


But we have had the nerve speak out year after year about their crimes and to organize shareholder pressure to push for responsible action. That's why in court our lawyer proudly referred to us as Chevron's "sharpest critic." What Chevron has actually sought to do is strip the communities in Ecuador of an ally in their fight, but Amazon Watch is not about to abandon our partners – those communities brave enough to take on the second largest oil company in the United States – and win.


There have been major setbacks in efforts to control corporate power in a post-Citizens United America. Imagine the consequences if large corporations were able to force those working hardest to keep them accountable to turn over all their contacts, private information, strategies and internal communications.


During Wednesday's hearing Ethan Dettmer, Chevron's lawyer from Gibson Dunn, specifically cited Amazon Watch as having created "petitions and demonstrations" as acts threatening to Chevron. Thankfully, their attorney was shut down mid-sentence by Judge Cousins who told him told that those are exactly the free speech rights we must protect.


Never forget: This entire legal effort is designed to keep the world from remembering the truth about Chevron in Ecuador. From remembering what Amazon Watch has been saying, and will continue to say to investors and shareholders, the media, governments, and communities everywhere – that Chevron:


We won a great victory in court this week, but we didn't win anything for those still suffering from Chevron's actions. We didn't win clean water, we didn't win improved health care, we didn't win a full-scale remediation of the toxic sludge Chevron deliberately dumped. But we did preserve our right to continue to pressure Chevron with the truth of their actions. We did preserve our ability to exercise our right to free speech and to be a watchdog against corporate crimes. That right is vital to protect the power of the people in our society. We will exercise that right until we DO win the things Amazonian communities in Ecuador need most.


Yes, Chevron can throw millions of dollars and thousands of lawyers at the problem and hope that they escape justice. They can overwhelm, bully, and intimidate critics by their sheer size and wealth. But this week they learned they won't always get away with it.