Don't Cry for Me, Argentina 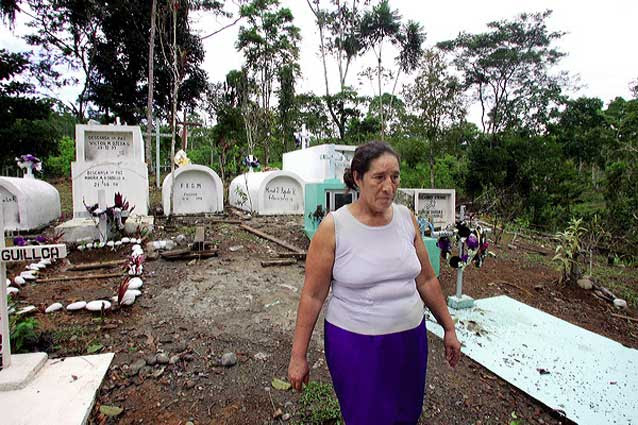 It's been another rough week for Chevron, the second largest U.S. oil company. The San Ramon oil giant reported this morning that its third quarter earnings had dropped by a third. But that's not the worst of it.

Chevron got a rude awaking Wednesday morning with news that Ecuadorian indigenous and farmer communities will seek to freeze some $2 billion of the company's assets in Argentina. This latest legal action is part of the communities' efforts to force Chevron to pay a $19 billion damages award handed down from Ecuadorian courts that found Chevron guilty of massive environmental contamination and rights abuses in the country's Amazon rainforest.

Ever since the 2011 decision – from a court of Chevron's choosing and based on much of the company's own evidence – Chevron has been on the lam, running from the law, and forcing some 30,000 Amazonians to go global to get the long fought justice they deserve. Between 1967 and 1991, the company deliberately dumped more than 4.3 billion gallons of toxic waste water, 18 million gallons of crude, and left behind some 1,000 super fund style sludge pits full of carcinogens. The result? Indigenous communities and their rainforest lands devastated, a public health crisis with no clean drinking water, and an epidemic of cancer and other ailments that have plagued the region for the last three decades. The communities are seeking a full environmental clean up, potable water, and funds for health services.

Adding insult to injury, Chevron deployed every legal tactic in the book to kill the case, and then extra judicial Michael Clayton-style tactics like threatening the judge, intimidating witnesses, and collaborating with Ecuador's military to stop inspections on contaminated sites. But, the global dragnet to hold Chevron accountable is closing in.

Unfortunately for the company, its assets are hiding in plain sight. Armed with an order from Ecuador's appellate court demanding Chevron pay up and comply with the sentence, the communities have filed in Canada, Brazil, and now Argentina to enforce the judgment, which could freeze bank accounts, dividends, oil sales income, or other assets as a way of meeting part of the $19 billion damage award. According to lead Ecuador lawyer Pablo Fajardo, winner of a CNN Hero Award and Goldman Environmental Prize, the process is more advantageous in Argentina due to the Inter-American Convention on the Execution of Preventative Measures, which allows for the automatic freezing of assets of a defendant that fails to abide by the law and refuses to pay a final foreign judgment. A judge can authorize seizure without even a hearing for Chevron.

As Enrique Bruchou, the highly regarded Argentine council for the Ecuadorians explains, "We will win this case. And it's going to set an example for the world that we in Latin America have grown up now and that we need to be treated as equals."

Left with little wiggle room, Chevron has signed a MOU with state run YPF to explore for unconventional crude, a move many see as a way to curry favor with the government of Cristina Fernandez.

Bruchou continued, "We don't want this politicized. This has nothing to do with the Republic of Argentina. This is the communities of Ecuador going against Chevron," he said. "I don't think we will see interference because frankly this is a civil matter, combined with the human rights abuses, which is an issue very dear to the heart of the Argentines."

What is shocking is the egregious mismanagement of the case by Chevron executives, who instead of resolving the issue years ago – to great relief of communities and company shareholders – has doubled down on a losing litigation strategy, even rewarding counsel with millions in bonuses after losing the case. While Chevron cared little about Ecuador because it is no longer producing petroleum here (though the courts gave the communities their first victory in ordering some $200 million of Chevron assets in country be turned over), the company has major upstream and downstream assets in Canada, Brazil, and Argentina, as well as other countries that communities may attempt to confiscate Chevron holdings.

The global enforcement efforts of the communities are now jeopardizing major Chevron growth plans, access to future reserves, and putting the company at a competitive disadvantage. Which is why outraged shareholders are urging the company to resolve the issue, and lambasting senior management for its bungling of the case. The company's public response to the Argentine filing was laughable: a few targeted purchases on Google news to try to offset the negative headlines and press stories, and a whiny statement attempting to claim that the judicial systems of countries like Canada, Brazil, and Argentina were inferior to those of the United States. What Chevron doesn't seem to realize is that the law is on the side of the communities, and there are more than 180 countries around the world where Chevron assets are now liabilities.

In this global game of cat and mouse, the playing field favors the plaintiffs, where Chevron must bat 1000%, and it's already 0 for 1. And, in a recent blow, the U.S. Supreme Court recently refused to hear a Chevron appeal to block Ecuadorian efforts to enforce the judgment around the world.

However, it has been a long and winding road toward justice, and many of the afectados-those affected by Chevron's reckless drill and dump practices – have lost their lives in the fight. Today in Ecuador is Dia de los Difuntos, or Day of the Dead, and tomorrow marks the 19th anniversary of the year the case was first filed in New York courts. To remember and celebrate the lives of those who have passed away, and commemorate their historic David vs. Goliath struggle, the communities will be holding a memorial in the town cemetery of Enokanqui.