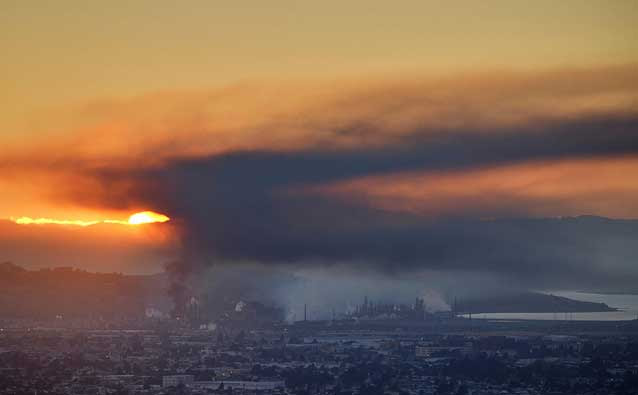 
In case anyone didn't get the message that Chevron has a reckless attitude with regard to environmental safety and responsibility, the explosion and fire Monday night at its refinery in Richmond, California – and Chevron's rhetorical stonewalling since then – have provided a smoky, toxic answer.


The disaster caused government officials to issue a "shelter in place" order for hundreds of thousands of nearby residents. It also worsened local residents' already abysmal view of the company.


At a community meeting Tuesday night, Chevron officials' bluster was met by outrage:


In a rowdy expression of frustration and anger, more than 500 residents crowded into Richmond Memorial Auditorium, where people shouted down Chevron and Contra Costa County public health officials on hand to answer questions about the accident.

The question asked most often was, "What are we breathing?" Residents were repeatedly unsatisfied each time a public health official said inspectors didn't know because they were still analyzing the data.

(...) Often when Chevron refinery General Manager Nigel Hearne spoke, he was met with extended boos and catcalls of "liar!" Residents held signs that read, "How many more 'accidents'?" and "Chevron out of Richmond."


The city of Richmond lies only 15 miles as the crow flies from Chevron's leafy corporate campus in affluent suburb of San Ramon. But it might be worlds away. Local community organizations that have participated in the True Cost of Chevron network said that Tuesday's disaster is symptomatic of a long record of pollution and lies in the largely industrial, low-income city.


Check out the Ella Baker Center's call to action, and join them and us in insisting that Chevron come clean in Richmond.