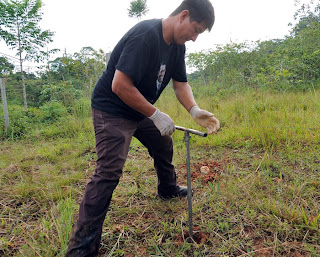 In the wake of a ruling against Chevron in Ecuador, demanding the company pay $9.5 billion in damages, Miami Herald reporter Jim Wyss visited a waste pit that Chevron claims to have remediated. Digging just beneath the surface of Chevron's lies, he discovers the crude truth:

Within a few inches the dirt gives off the pungent odor of petroleum. Within a few feet the dirt glistens with oil residue. When a few handfuls of the soil are dropped into a bucket of water, a thick oil-slick coats the surface.

Over the years that Chevron has tried to evade accountability for the environmental and human catastrophe it caused in Ecuador's Amazon rainforest, the oil giant has changed its tune so many times, it's hard to keep track. For instance, after the courts in Ecuador found Chevron guilty of massive contamination in February, many recent articles have pointed out that when when it was arguing to remove the environmental lawsuit against the company from U.S. courts (where it was originally filed), Chevron submitted 14 different affidavits attesting to the fairness and impartiality of Ecuador's courts.

Chevron's lawyers and spokespeople have a handful of different arguments they like to make when attempting to defend themselves against charges that the company is responsible for massive contamination in Ecuador. Some of them have been laughed out of court. Others have been proven to be untrue, or only work based on some other premise that doesn't hold up.

Sometimes Chevron's representatives actually claim that they did no damage in Ecuador over the course of more than two decades of operations there. But if they're talking to someone who actually has a clue, one of their favorites goes something like this… I'm paraphrasing here:

okay, there may have been a little mess here and there around some of our drilling rigs – nothing to worry about, really – but we were but a small minority partner in an oil concession with other companies and when we left Ecuador, we cleaned up our share of any pollution and got some government officials at the time to sign a piece of paper releasing us of any liability… done and done!

Now, first of all, Chevron –– in the form of its predecessor company Texaco –– was the sole and exclusive operator of the oil concession, covering thousands of square miles of formerly-pristine Amazon rainforest in Ecuador. Texaco made all the operational decisions, and ultimately, they chose to cut corners, ignore basic safety and health concerns, and put people's lives at risk (Chevron spokesperson Silvia Garrego reluctantly admits so in 60 Minutes' report 'Amazon Crude' - watch it here).

Regardless, the release of liability they secured from the Ecuadorian Government –– based on cleaning up a small percentage of toxic waste pits, and not dealing with the systemic soil and water contamination caused by spills and deliberate dumping of billions of gallons of toxic wastewater directly into streams and rivers for years –– never released the company from claims by private citizens. Of course, it's those private citizens who have persevered over nearly 18 years of legal battles, fighting to hold the company accountable while also suffering a severe public health crisis. And of course, as we've been saying for years, their so-called "remediation" was a fraud anyway.

The recent Miami Herald article begins with an activist who himself lost family members to the pollution himself:

Donald Moncayo walks to the edge of a flat grassy field that once held two large pits that brimmed with a stew of water and crude from an oil-drilling operation. He lifts a heavy auger above his head and prepares to plunge it into the ground.

“They always show you the shirt the coat and the tie,” he said of the area, called Sacha 53, which is now pastureland and spindly trees. “They never show you the tumor underneath the shirt.”

For almost a decade, celebrities, journalists and shareholders have tromped through Ecuador’s jungles on competing excursions that have become a routine part of what could be the world’s most expensive environmental case.

The “Toxic Tour” — led by Moncayo — is held on behalf of some 30,000 Ecuadorian villagers who claim Chevron’s predecessor poisoned their environment with shoddy environmental practices that included pumping millions of gallons of oil-tainted wastewater into creeks and streams.

The other tour is led by Chevron. The oil giant shows idyllic agrarian landscapes — like Sacha 53 — where Texpet, a subsidiary of Texaco, helped pump crude from the 1960s to 1992 when it was a minority partner of the state-run oil company.

Texpet operated the well until 1989, when it handed it over to the government. During those years, Sacha 53 produced almost 3 million barrels of oil. In the process, Texpet dug two large pits to hold the drill-bit lubricant, or drilling mud, and to catch the initial spurts of crude that gurgled up during the extraction process.

The pits were among the 162 that company was required to cleanup under the government agreement.

Chevron said the site was typical of its remediation efforts. It vacuumed up the oil, dug out the tainted dirt, used chemical stabilizers, refilled the pit with clean soil and replanted the area. The company has photographs detailing the process, and the government’s report approving the remediation. The surrounding pastureland seems to speak for the area’s ecological health.

But then Moncayo plunges his auger into the ground. Within a few inches the dirt gives off the pungent odor of petroleum. Within a few feet the dirt glistens with oil residue. When a few handfuls of the soil are dropped into a bucket of water, a thick oil-slick coats the surface.

“This is their remediation effort,” Moncayo says. “They’re no better than animals.’’

The plaintiffs say it’s proof that Chevron lied about the cleanup and then got compliant government officials to sign-off on its shoddy work.

Chevron spokesman and tour leader, James Craig, said it’s not surprising to find degraded crude at the site. It might be naturally occurring, Moncayo might have dug outside the boundaries of the remediation area, or the plaintiffs might have spiked the ground with oil to discredit Chevron, he said.

Reading the second part of the article, I was taken aback by Donald calling those that lied about the remediation being "no better than animals." Then again, he speaks from profound grief sometimes, having lost his mother to toxic poisoning. Then, there's James Craig, well-paid American Chevron spokesman, visiting the scene of the company's crimes and accusing the plaintiffs of "spiking" the ground with oil to fool a journalist.

Wow. To make such accusations against people who have lost loved ones to oil-related illness and who suffer daily for a lack of clean water to offer their children represents the height of callousness.

I could almost agree with Donald's assessment, but I'm going to assume the best.

In the wake of the guilty ruling from an Ecuadorian court, James Craig has been forced to work overtime trying to spin the company's (losing) side of the story. Maybe he's just been spending far too much time out in the contaminated sites around Chevron's former oil operations and was simply overcome by the fumes.

Mr. Craig, get yourself a breath of fresh air. Maybe a drink of (bottled) water. And then try telling the truth. I understand it's therapeutic. 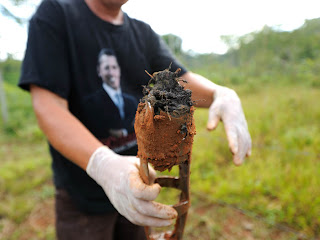 Donald Moncayo shows the contamination just beneath the surface of a site that Chevron claims it remediated. The site, at oil well Sacha 57, was operated exclusively by Texaco. It was one of the sites that Chevron certified to the Ecuadorian government in exchange for a release of liability, which nonetheless did not cover claims from private individuals. Testing during the pollution trial revealed significant toxic contamination still there. All photos by Brandon Wu 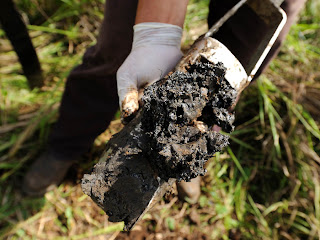 Contamination from another site Chevron claims it remediated, called Atacapi 5. Testing at this site during the trial showed 21,976 parts per million of total petroleum hydrocarbons, 21 times higher than the maximum 1,000 PPM TPH allowed under Ecuadorian law. 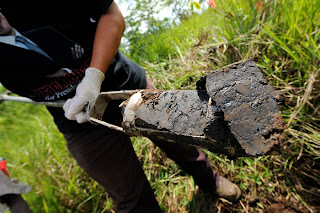 Oil can be clearly seen in this soil core sample taken from the Atacapi 5 site.