The Ecuadorian plaintiffs demanding Chevron clean up its toxic mess in Ecuador filed a legal memorandum last week containing some priceless truth-telling that Chevron's lawyers tried to stop, including the opinion of a leading authority on oil field contamination that Chevron dumped toxic liquids into the environment amounting to "30 times the quantity or the volume of crude that was spilled in the Exxon-Valdez disaster."

One of Chevron's lawyers at the law firm of Gibson Dunn & Crutcher flew into a panic during a recent deposition when an American consulting expert began to testify about the massive quantities of toxins dumped by the oil giant in Ecuador, where Chevron faces a multi-billion dollar legal liability, according to court papers filed recently.

It goes on to further explain why an American expert was testifying at a deposition:

Faced with overwhelming scientific evidence of the contamination in Ecuador, Chevron recently returned to U.S. courts to seek discovery of 23 Americans associated with the case. This led to the deposition in San Diego on Sept. 10 of the American consulting expert, William Powers.

Last month, a judge permitted Chevron's lawyers to depose Powers, a petroleum engineer and environmental expert. In San Diego, on September 10th, Powers was deposed by Andrea Neuman, one of Chevron's lawyers from corporate law behemoth Gibson Dunn. Also present was a lawyer for the plaintiffs, Andrew Wilson.

After several hours, Ms. Neuman wrapped up her deposition, and Mr. Wilson indicated that he would like to cross-examine Mr. Powers for a few minutes, a standard practice. At which point, apparently, Ms. Neumann and her Gibson Dunn colleagues FREAKED OUT.

First, Ms. Neuman said the office was closing. Then a colleague said they hadn't been notified of the lawyer's intention to question Mr. Powers, which the plaintiffs called "remarkable" since it's standard for depositions to conclude with a cross-examination. Then they said the cameraman shooting video of the deposition had to pack up. Finally, they claimed "we literally have to leave the building."

But as the plaintiffs recount in their Sept. 28th legal filing:

"Mr. Wilson insisted on fifteen minutes of cross-examination, during which the building did not shut down, the office did not close, the cameraman did not have to pack up, and no one had to leave the building."

At which point, Mr. Powers, a leading authority on oil field contamination, simply answered some questions, revealing the devastating truth about Chevron's legacy in Ecuador that the company has tried so hard to conceal. 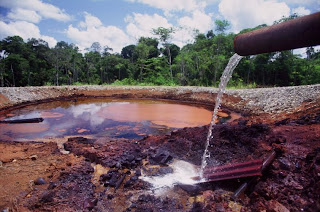 Photo by Lou Dematteis, from the book Crude Reflections.

More from the legal filing:

Q:  Now, when Chevron-Texaco designed its pits in the Ecuadorian Amazon, what design did it use?

Powers: Dug a hole in the dirt and deposited the drilling muds in the unlined hole.

Q: And if Chevron-Texaco was designing those pits in the United States, would it have been able to dig a pit in the – and put in the drilling muds as you described?

Q: What's the consequence of Chevron's design of its pits in the Lago Agrio concession?

Powers: Two consequences: the leeching of the chemicals into the ground, and ultimately into the ground water; and the overflow of the pits due to lack of maintenance and rain water and overflowing directly into the drainage channels surrounding that pit.

Q: And what's the basis for your conclusions concerning the Chevron-Texaco's pits?

Powers: Having viewed the pits and reviewed the nature of how those pits were designed, utilized, and the fact that – it is uncontested that the pits were left with drilling mud in them.

Q: And when Chevron developed the oil field in Ecuador, did it do so in conformity with standards for treatment of production water that were in place in the United States at the time that it was building its infrastructure in Ecuador?

Q: Can you describe the ways in which Chevron's Ecuadorian concession fell below standards it would have been required to meet if that field were in the United States?

Powers: Based on the salinity and the produced water from the field, the company would have been required to reinject that water into a subsurface formation.  Could not have operated that oil field or produced a single barrel of oil without having that produced water injection system operational.

Q: By failing to reinject production water in the Lago Agrio concession, what impact did that have on the environment in Lago Agrio?

Powers: It contaminated the surface water at the points where it was injected, not only with the high salinity of the produced water in an environment that has almost no natural salinity, but the trace contaminants of heavy metals and oil also contributed to the generalized contamination of that surface water.

Q: If you include the produced water in your comparison between the discharge into the environment from Chevron's Lago Agrio concession, when you compare that to the Exxon-Valdez oil discharge from that catastrophe, how would you compare them?

Powers:  Both the produced water and the crude oil are toxic. The – you can argue about the relative toxicity of them both. But the amount of toxic liquids that should not have been in the environment in Ecuador was at least 30 times the quantity or the volume of crude that was spilled in the Exxon-Valdez disaster.