The Oriente – the East – is Ecuador's Amazon rainforest region, home to unparalleled biological diversity, as well as the country's oil patch and massive contamination left behind by decades of oil operations by Texaco (now Chevron). Amazon Watch's Ecuador campaign team is on a brief field research mission in the Oriente, and today was a full day investigating former Chevron oil well sites, abandoned toxic waste pits, and visiting with community members affected by oil pollution. We're basing out of oil boom town Lago Agrio – "sour lake" – named for Sour Lake, Texas where Texaco was founded. Beginning as a base camp for Texaco, Lago Agrio is in the center of what used to be the Amazon rainforest in northeast Ecuador, only about a dozen miles from the Colombian border. 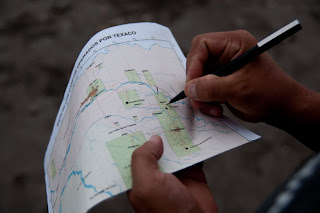 Today was only our first day out in the field on this visit, inspecting oil extraction sites and contamination, shooting photos and video, and conducting interviews and research. We're here for the next week and while we have a busy schedule, we'll try to report back here about some of the places we discover, some of the people we encounter, and some of the stories we hear. 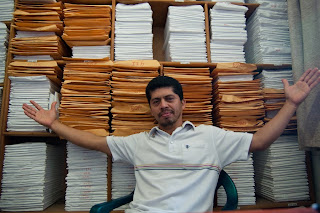 We started off the day with a brief visit to Pablo Fajardo, lead attorney for the 30,000 people who are plaintiffs in the lawsuit demanding full clean-up by Chevron of its contamination in the region, as well as compensation for the horrific impact the company's legacy has had – and continues to have – on the lives and livelihoods of the affected communities. Sitting in his office, he was dwarfed by a portion of the legal documents from the 17-year legal battle to hold Chevron accountable. 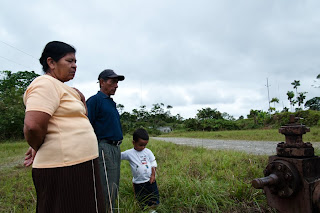 After leaving Lago Agrio, our first stop this morning was Chevron/Texaco's fifth exploratory oil well site, so-called Lago Agrio #5, or Lago cinco. We checked out a waste pit that Chevron claims was remeditaed, and dug up black, gunky petroleum from only a couple feet beneath the surface of the ground. Sadly, it also came up with a bunch of water as the water table is very high here, with tons of rain, and primarily sandy, permeable earth. We met a couple who lives mere yards from the pit and who told of various health problems that ail their family and neighbors. 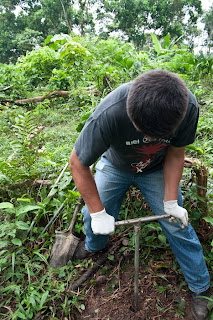 We then took a trip to the second well drilled by Texaco/Chevron, called Lago Agrio #2, or Lago dos. There, we investigated another of the toxic waste pits that Texaco claims to have remediated, finding more crude just beneath the surface, abandoned to leech into the groundwater of people living nearby. There, our friend and guide, Donald Moncayo, explained how he was born only a few yards from the spot where he dug his auger into the ground to pull up the toxins. In fact, the waste pit was on his family's land. 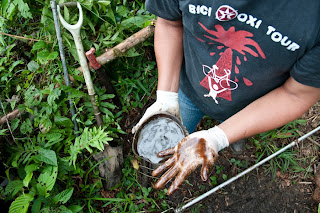 With a furrowed brow, Donald told us how his mother died after bathing in a polluted stream. A tumor on her back suddenly became unbearably painful and horribly inflamed only hours after coming into contact with the toxic water. As she became gravely ill, the family summoned a local doctor who rushed over. Shocked, he told Donald's mother, "you've been poisoned." She succumbed within hours. Donald had two brothers – twins – who died five months apart while still babies. His adult sister had an operation in 2006 for a brain tumor and is still undergoing chemotherapy in Quito. 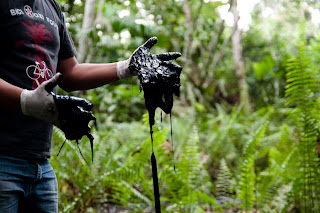 While these stories are disturbing and tragic, it's impossible not to be inspired by Donald's commitment to seeking justice for all of the people affected by Chevron's devastation of the Ecuadorean Amazon. 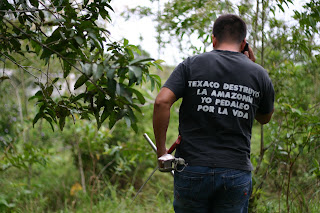 Donald was taking us around today as a friend and ally, but also as an activist with the Amazon Defense Coalition. He has become profoundly knowledgeable about the contamination sites and the people affected and is constantly taking journalists, scientists, activists, and others out to see Chevron's toxic legacy in the Amazon. 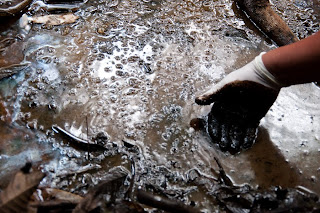 As we were visiting Donald's family's land at Lago #2, a family friend, Don Bresillo, walked up. Don Bresillo's land is adjacent to that of Donald's and he was friends with Donald's late father. We spent some time with Don Bresillo and learned the history of the surrounding area from when he arrived in 1970, when it was still the traditional hunting grounds of the Cofan tribe. 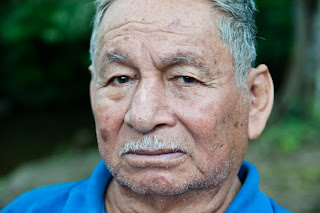 From there, we continued on, southeast of the huge 'Lago Agrio' oil field, across the Aguarico river, and to the 'Aguarico' field. We visited Aguarico #4 well site, now being used by Ecuadorean national oil company Petroecuador to reinject the toxic wastewater byproduct of oil drilling back deep underground. 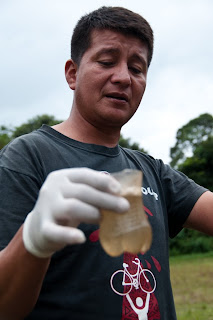 Chevron likes to try to shift blame for the devastation in the Amazon to Petroecuador and in the next post, we'll look closely at the toxic wastewater (waters of formation, or produced water) and who is to blame for the poisons in the environment we saw, smelled, and touched today. 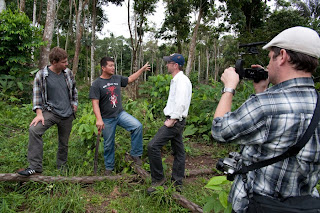 As dusk descended on the field next to the well at Aguarico, and bugs began nibbling at our ears and necks, we bundled back into our van to head 'home' to Lago Agrio. With stories of suffering on our minds and the smell of toxic pollution still in our noses, we pulled up to the bank of the Aguarico river. As the ferry took our van back across the river, the last remnants of a beautiful Amazon sunset lifted our heavy hearts and reminded us of all we have to be grateful for. 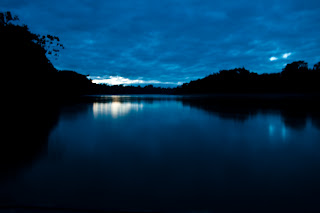